'Let's Do This': After Owning Liberals Today, Mike Pence Takes A Victory Lap In Front Of Kavanaugh Protesters 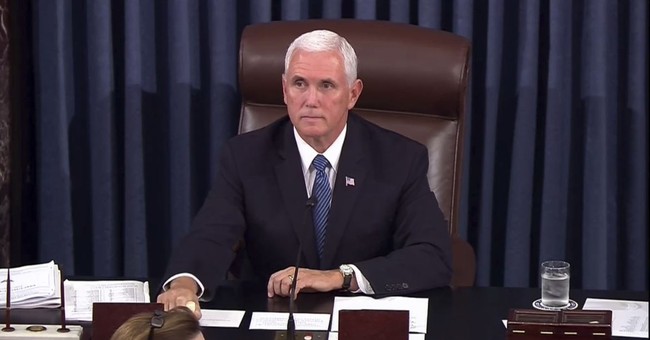 It’s done. It’s finished. Judge Brett Kavanaugh has been confirmed to the U.S. Supreme Court after one of the nastiness nomination fights in recent memory. He will be sworn in later today by Chief Justice John Roberts and retired Associate Justice Anthony Kennedy. The vote was a slim 50-48, but it’s still a win. Vice President Mike Pence presided over the vote just in case there was a tie. With Kavanaugh confirmed, Pence had to wade through the hordes of Mordor (i.e. anti-Kavanaugh protesters), where he confidently took a victory lap right in front of them. Fox News Chad Pergram has more:

1) After Kavanaugh vote, Pence walked from the chamber with his detail to the exit which would open the doors up to the Senate steps. They swing the doors open…and all you can see is a throng of protesters across the plaza…and hear are protesters shouting “Shame! Shame! Shame!”

2) As Pence stands in doorway of Capitol at top of Senate steps, protesters across the plaza spot him and start shouting louder. His motorcade waits at the bottom of the Capitol steps.

3) Pence stands for a moment in Senate doorway, indecisive, w/protesters hollering. Pence then reverses course to exit Capitol another way. Pence walks a few steps. Pivots & says “let’s do it.” Pence then defiantly walks down the Capitol steps and waves to Kavanaugh protesters

Pence walks down Senate steps after Kavanaugh vote amid cacophony of protests. Initially stood in Senate door & was going to exit another way. Then,
defiantly reversed course, telling security detail “let’s do it.” Waves to to the demonstrators pic.twitter.com/N3avjtqHa1

After confirming Kavanaugh, Mike Pence walks outside and WAVES to the protesters who are giving him the middle finger.

It doesn’t get any better than this, folks. pic.twitter.com/cxCYT2fER5

Boom! We won, the Democrats lost. The economy had solid numbers this week. Trade deals were renegotiated. And Kavanaugh was confirmed. This, by far, is one of the best weeks of the Trump presidency. Also, for the skeptical Republicans who voted for Trump over judges, he delivered on another promise, huh? This is a huge win. A solid conservative majority on the Court for the next generation.