Take That, Democrats: Majority Of Voters Agree With Kavanaugh...This Nomination Fight Is A National Disgrace 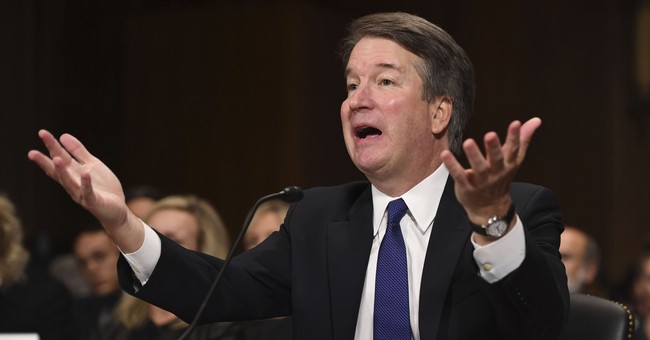 The Left has accused Judge Brett Kavanaugh of being a drunken, conservative, Irish Catholic rapist. It’s been a brutal character assassination plot executed by the Left, one that should leave anyone who believes in the rule of law and due process furious over what has transpired, least of all Kavanaugh’s family. The three allegations of sexual misconduct are without evidence or corroborating witnesses. Christine Blasey Ford, Deborah Ramirez, and Julie Swetnick are the women who have come forward, though Swetnick’s accusation is beyond ridiculous: Kavanaugh was part of a gang rape ring in high school.

There’s no proof to any of these accusations. Ford can’t remember key details, Ramirez isn’t sure that Kavanaugh was even at the party where he allegedly exposed himself, Swetnick’s story has been torn apart by everyone. Even she backpedaled on some of the details during her interview with NBC.

Kavanaugh was visibly emotional and angry last week when he testified before the Senate Judiciary Committee. He gave an aggressive and robust defense of his character and reputation, which has been destroyed by these left-wing smears. He said the nomination process had become a national disgrace, that advise and consent had been replaced with search and destroy. While Democrats were taken aback that a man who was accused of terrible things without evidence would get mad, normal voters agree with Kavanaugh that, indeed, this fight has become a disgrace (via Rasmussen):

An angry Judge Brett Kavanaugh told the Senate Judiciary Committee late last week: “This confirmation process has become a national disgrace. The Constitution gives the Senate an important role in the confirmation process, but you have replaced advise and consent with search and destroy.” Most voters think he’s right. Even Democrats are conflicted.

Seventy-seven percent (77%) of Republicans and 51% of voters not affiliated with either major party agree that Kavanaugh’s confirmation process has become “a national disgrace.” Even among Democrats whose senators have been leading the charge against the nominee, 40% agree, and only slightly more (43%) disagree, but 17% are undecided.

Polls are showing that this nomination fight has animated Republicans like no other. The Democrats’ quest to block this nominee and hope they can drive turnout on their side is having a double-edged sword effect.