Holding The Line: The GOP Could Have Their Winning Issue For 2018 Right Before Their Eyes 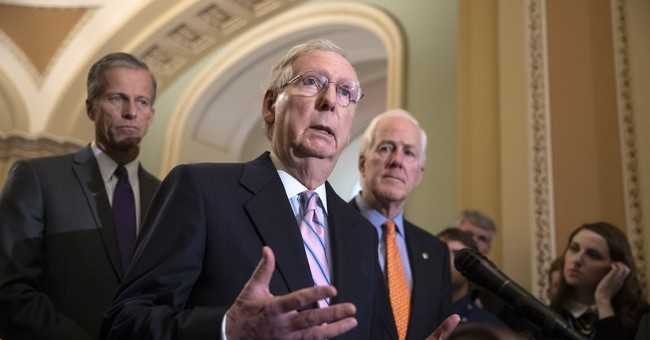 It’s the end, right? The Democrats are going to retake the House and possibly the Senate. FiveThirtyEight says there’s an 80 percent chance the Democratic Party retakes the House and a 30 percent chance they reclaim the Senate. Arizona and Tennessee are the GOP races we need to watch in our backyard. It’s possible we can lose those races. If that happens, it’s a 50-50 Senate. If that happens, plus all the red state Democrats somehow scrapping by on re-election, it’s a 52-48 Democratic majority. Yes, it’s possible. And with the chaos that has engulfed the Brett Kavanaugh Supreme Court nomination, the Left is looking to weaponize Me Too to get their voters to the polls. There is a glimmer of hope. Club For Growth has some polling that could help bolster the GOP’s chances of holding the line. The organization hired the data firm WPAi, who told a then-panicky Sen. Ron Johnson (R-WI), that he had a pathway to victory against Democrat Russ Feingold. They were right. So, what does the polling say? The negatives in the 41 most competitive House races for Trump are high. That’s no shock, but WPAi adds that the GOP has a plus-three advantage on the ballot, with 25 percent of voters in these districts saying they could be persuaded to vote Republican this year. The Wall Street Journal’s Kimberley Strassel has more [emphasis mine]:

The difficulty is that different voters want to hear different things. Republicans have been touting their tax cuts and the economy, and they should. But the club’s data make clear that uncommitted voters want more than past achievements, or a scary picture of Nancy Pelosi, or excuses for Mr. Trump. They want promises for the future. And yes, they remain wary that Democrats will reverse particular economic reforms.

Which is why the message that resonates most strongly by far with persuadable voters is a Republican promise that they will make permanent last year’s middle-class tax cuts.Rep. Kevin Brady, the Ways and Means Committee chairman, has introduced legislation to do just that—and it’s mind-boggling that Republicans haven’t already scheduled votes. Majority Leader Mitch McConnell doesn’t have 60 Senate supporters, but Republican candidates could use Democratic “no” positions to huge effect in their races.

So, that’s it. It’s a push to make the Trump tax cuts, which has benefitted the middle and working classes, permanent. The script writes itself. This policy helped create three million jobs, lower unemployment to an 18-year low, incentivized companies to give over three million workers bonus checks averaging $1,000 or more, and reduce jobless claims to their lowest in a half century; Democrats want to gut all of it because…resist. It could be useful fodder for any race.

She adds there were three issues where suburban “uncommitted voters” reacted strongly against Democrats. They’re against the Left’s push to abolish Immigration and Customs Enforcement; they want sanctuary cities defunded and Obamacare repealed. What jacks up Republicans, Strassel adds, is the Democrats overt animus to President Trump, and the Democrats putting our economic growth and constitutional rights in the crosshairs.

The problem is selling that without Trump holding rallies and nationalizing the race, according to the data. Strassel added it seems the GOP will have to have multiple precise and efficient targeted engagement with certain voter universes, writing "for the most part the emphasis and message needs to be entirely different depending on block-by-block geography."

Don’t get me wrong, I love these rallies, but they turn off these suburban voters, who shockingly are open to vote Republican this cycle, despite all of the doom and gloom talk that’s spewed over liberal media outlets. On the flip side, it's boosting enthusiasm in the rural regions, so there is a case to be made that running away from Trump is a bad move. I wouldn't disagree with that. His economic record is not bad. There are many ways to slice the electorate and win. This will take more finesse, but the groundwork, the baseline to build a winning message with these voters and hold the line on Capitol Hill is there.