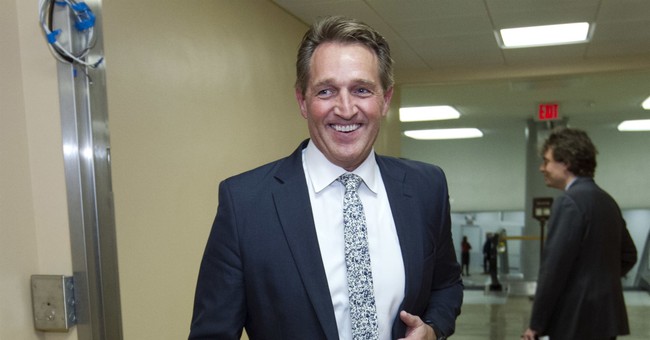 Sen. Jeff Flake (R-AZ) is no fan of Donald Trump. He’s not running for re-election. Then again, he’s made himself quite the thorn in the side on some issues for this White House, specifically on the issue of lower court judges, who he mulled blocking over the president’s stance on tariffs. He has all the cards. He’s out in a few months, and he’s the key vote on the Senate Judiciary Committee concerning the Brett Kavanaugh Supreme Court nomination (via Politico):

Now Flake holds the keys to a Supreme Court confirmation Trump prizes dearly — and could soon yank them away.

Flake flashed a yellow light Sunday night on Brett Kavanaugh’s high court bid, telling POLITICO that he won't support advancing the nomination this week if fellow senators don’t do more to hear out a woman accusing the nominee of sexual assault more than three decades ago. Opposition from the Arizona Republican wouldn’t doom Kavanaugh outright, but it already has ratcheted up political pressure on a GOP struggling to keep Trump’s Supreme Court nominee from a full implosion.

Flake is a charter member of the GOP’s anti-Trump caucus, one of only a few senators in the president’s party who freely tee off on the president’s handling of issues from trade to Russia, though they rarely actively undercut his agenda. Another member of that caucus, Sen. Bob Corker (R-Tenn.), also called on Sunday night for a delay in the Kavanaugh confirmation process.

But Flake, unlike Corker, sits on the Judiciary Committee. A "no" vote from him on the narrowly divided panel would force Republicans to bring Kavanaugh to the floor with a negative recommendation, or without a committee vote at all, in order to keep the nomination on track.

Yet, citing Politico, is this “Flake’s revenge”? No, not really. Let’s discuss the allegation. A woman named Christine Blasey Ford alleges that a drunken 17-year-old Brett Kavanaugh tried to sexually assault her. It’s a near-40 year old allegation. It’s impossible to verify. There are no corroborative witnesses. The other party involved, Mark Judge, said he does not recollect this event ever happening. It’s a he said, she said. Though the point is not to get to the truth. The point is to smear a Trump nominee, cast his as a would-be rapist, and hopefully use the anti-Trump anger to improve the Democratic Party’s position on the Hill this midterm cycle, so by next Congress maybe they can effectively block him. Right now, the Democrats don’t have the votes.

When this allegation of attempted sexual assault was lobbed last week, Flake called to delay the committee vote, which was slated for Thursday. It’s done. Senate Judiciary Committee chair Chuck Grassley (R-IA) said a hearing next Monday will be held on the allegations against Judge Kavanaugh. So far, Ms. Ford and her lawyer, Debra Katz, her lawyer, have gone AWOL. No answer, no reply. If they don’t show up on Monday, the show goes on—and Mr. Flake agrees:

Sen. Jeff Flake, R-Arizona, sits on the Judiciary Committee and had previously said the committee should hold off on voting until they hear from the accuser. However, Flake said Tuesday that if Ford fails to appear at the hearing scheduled for Monday, he would support his party's push to move forward on a vote on Kavanaugh.

"I think we'll have to move to the markup," he told CNN.

Flake said he's hopeful Ford will accept the committee's invitation and speak at the hearing. "I hope she does. I think she needs to be heard," he said.

So, there you have it. If Ford is a no-show, and it’s looking like she might be, then he’ll vote to move this nomination of an eminently qualified judge forward.