No, That Woman Behind Kavanaugh Was Not Doing A White Power Hand Signal And She's Not A Racist 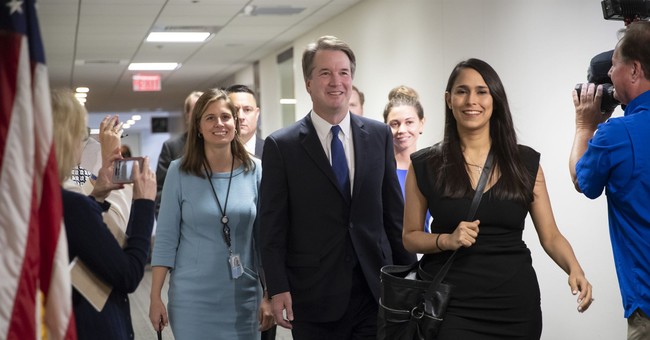 So, do Democrats really like having bombs explode in their faces because they’re getting worse. The Left’s resistance movement against the Supreme Court nomination of the highly qualified, and soon-to-be associate justice, Brett Kavanaugh has been lackluster. It wasn’t until this weekend that Sen. Chuck Schumer (D-NY) planned to execute a blitz in the opening moments of today’s confirmation hearing. Yet, Democrats interrupted the proceedings 63 times to put forward a trash motion to delay the hearing until they can read all these documents…only to circle back and declare what we already know: they’re not supporting his nomination. It’s all an effort to put this nomination fight off until after the midterms, where Democrats think their position on the Hill will be better. But before we even get to all of that, we need to talk about this piece of idiocy that occurred. Apparently, another reason to derail the Kavanaugh nomination is because the woman sitting behind Judge Kavanagh at today’s hearings was supposedly giving a white power sign.

Who is she? What’s up with the white power sign? @MSNBC pic.twitter.com/VUU9QsFdXW

This is Zina Gelman Bash, a White House lawyer and the granddaughter of Polish Jews who just barely escaped the death camps. Take a bow. https://t.co/MpN6TT3f2Z

Oh and her mother is Mexican-American. Really hit the bullseye with this one.

Zina is a friend of mine, and I’ve never heard her utter a racist remark. She was born in Mexico and is raising a beautiful family in her adopted home. Try not to let your lunacy shade into slander of good people. https://t.co/JaUErd8gGh

Oh, here we go. You can hear it now. It’s the outrage engine revving up. The woman’s name is Zina Gelman Bash. She’s also pictured with Kavanaugh in the featured photo above. She’s wearing the black dress. She’s supposedly throwing an A-Okay sign, which seen as a white power sign among whacko lefty circles. Just so we’re clear. That’s fake news. The anti-Defamation League said the sign is not one that espouses or promotes white power. Also, she’s a White House lawyer, her mother is Mexican-American, and her grandparents escaped the Nazi death camps.  This is what happens when you’re liberal, stupid, and go off half-cocked on social media. You end up getting smashed in the face with the rake you just stepped on.

UPDATE: Day 2. Zina Bash's husband, John Bash, a U.S. Attorney, defended his wife against this conpsiratorial trash...and the reactions were what you'd expect from the Left. Guy will have more on this later.

Who's ready for day two of "this highly accomplished Mexican-American descendent of Holocaust survivors is a secret Nazi" twitter pic.twitter.com/mgAOpUq9RN

The attacks today on my wife are repulsive. Everyone tweeting this vicious conspiracy theory should be ashamed of themselves. We weren’t even familiar with the hateful symbol being attributed to her for the random way she rested her hand during a long hearing. 1/3

Zina is Mexican on her mother’s side and Jewish on her father’s side. She was born in Mexico. Her grandparents were Holocaust survivors. We of course have nothing to do with hate groups, which aim to terrorize and demean other people — never have and never would. 2/3

Some of the Twitter comments have even referred to our baby daughter. I know that there are good folks on both sides of the political divide. I hope that people will clearly condemn this idiotic and sickening accusation. 3/3

The replies to this guy (correctly) blasting deeply insane attacks on his wife are just bonkers. https://t.co/eXDU6AHSH5

Really? Nobody sits like that. Nobody. Ever. Own it. pic.twitter.com/wPDuCRmpwb

Your defense of your wife using a white power hand sign is repulsive. I'm ashamed of you and your wife. You might not be familiar with it, but that just means you're purposely ignorant. It's a white power symbol. Period. End of story. You're disgusting, and so is your wife.

Your wife obviously was following instructions she received on her phone. Instead of acting with the dignity her position requires she acts out and holds a lingering hand signal for the camera.