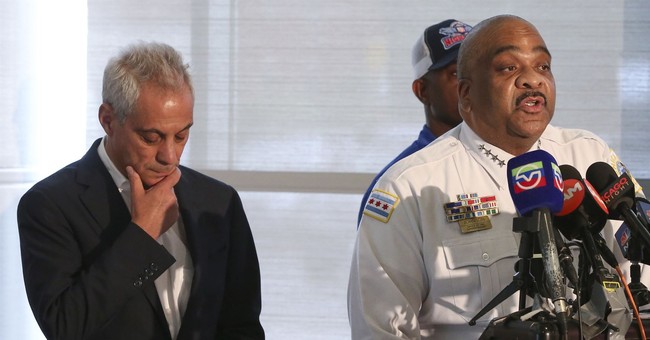 Chicago Mayor Rahm Emanuel’s children have all left for college. He’s an empty nester—and he’ll be out of a job soon. The mayor announced today that he’s not seeking a third term as mayor (via NBC Chicago):

Chicago Mayor Rahm Emanuel unexpectedly announced Tuesday that he will not be running for re-election.

In a last-minute press conference, the mayor revealed he would be stepping down from his post after serving since 2011.

"This has been the job of a lifetime but it is not a job for a lifetime," he said.

The upcoming race began to take shape, with potential candidates already throwing their hats into the ring, including former Chicago Police Supt. Garry McCarthy, who was fired by Emanuel in the wake of the release of video showing the fatal police shooting of Laquan McDonald.

Prior to this announcement, Rahm was facing nine challenges (via WSJ):

Chicago Mayor Rahm Emanuel is facing a crowded field of challengers for next February’s election as the two-term mayor continues to tout the city’s business success and braces for a racially charged police-shooting trial this summer.

While the growing pool of candidates indicates the former chief of staff to then President Barack Obama may be vulnerable, Mr. Emanuel still outstrips them all in name recognition and fundraising.

On Thursday, former federal prosecutor Lori Lightfoot announced her candidacy for mayor, bringing the total number of challengers to nine.

Dick Simpson, a political-science professor at the University of Illinois at Chicago, said the mayor could face a historic number of challengers. That is not a good sign for Mr. Emanuel, he said.

“This is an expression of the fact that they think Rahm is weak and they could win in a crowded field,” he said.

But the large crop of candidates could also be a boon for Mr. Emanuel, as his challengers struggle to stand out. The candidates could split key sectors of Chicago’s electorate, leaving many without a strong base of support to rely on.

The chances might have been whittled to 50/50, but I wouldn’t have been shocked if Rahm eked out another win. Still, the latter part of his tenure has been riddled with controversy. The 2014 Laquan McDonald shooting and the suppression of the police camera footage so closeto the 2015 mayoral election (it was eventually released…after Emanuel was re-elected) brought much heat to the mayor’s office, it sunkEmanuel’s approval rating to 18 percent, and proposed legislation put forward in an effort to recall Emanuel. The cloud of that shooting and its fallout remain, as the officer involved in the shooting, Officer Jason Van Dyke, has been charged with murder. His trial begins soon. Three other police officers were chargedwith impeding that investigation as well. The city is still embroiled with gun violence, despite having some of the most stringent anti-gun laws on the books.