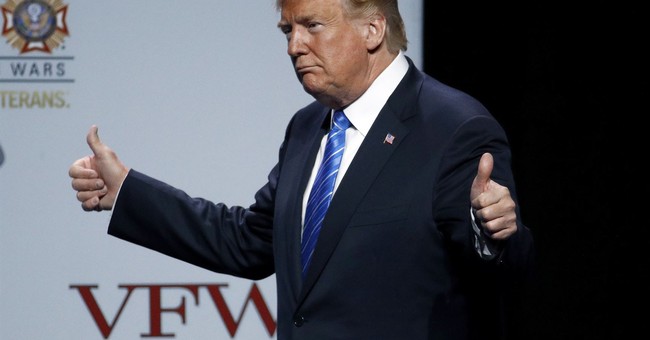 Oh yes, this will definitely drive Donald Trump from office…said by no one. Once again tolerant liberals decided that Trump’s Walk of Fame star was problematic. It was triggering. And it had to go. Some loser with a pickaxe destroyed it early this morning (via NBC Los Angeles):

Officers were called around 3:30 a.m. to the star's location on Hollywood Boulevard near Highland Avenue, where they found a small pile of rubble in place of the star that Trump received in January 2007 for his role in the NBC show "The Apprentice."

The star-smashing suspect, who reported the crime to police, later turned himself in to Beverly Hills police, according to the Los Angeles Police Department. The pickax was left at the scene.

The man's identity was not immediately available.

Witness David Palmer said he is accustomed to seeing the unusual on Hollywood Boulevard, where tourist mingle with street performers dressed as superheroes and other characters, but he was surprised to see the Walk of Fame vandalism.

"I'm like, 'Why are you hitting that star? What did Donald Trump do to you?'" Palmer told NBC4. "Then he went around the corner and I think he left.

So this just happened again... somebody used a pick axe to destroy Donald Trump's star on the Walk of Fame. Still trying to learn more, but we know it's been vandalized multiple times, just never on this level. @NBCLA ??: Victor Park/Loudlabs pic.twitter.com/lzq7YrsSRV

As the news station noted, this isn’t the first time the star has been destroyed or damaged. A man pretending to be a construction worker in 2016 destroyed it, and it was spray-painted as well in another incident that same year. It’s annoying, but c’mon, folks. This is the Grade-A loser theater. These people cannot stand that Trump is president and guess what—he’s not going anywhere in the foreseeable future. So, keep acting like children. We’re all laughing at you. And of course, the star will be replaced. Fox News writer Stephen Miller also noted something interesting about Trump’s smashed star:

The best thing about Trump's star being cratered is Kevin Spacey's star is literally right next to it and remains in perfect condition pic.twitter.com/EaeXcdArpG