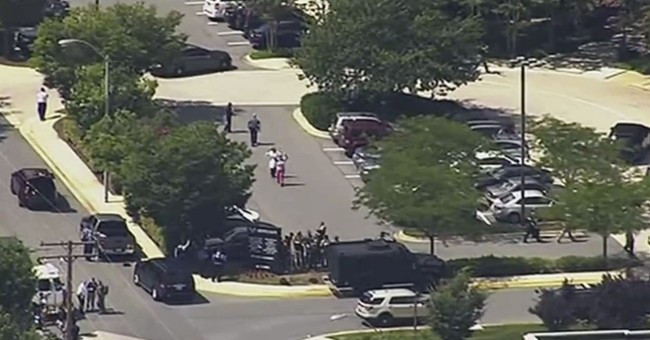 We have reports of a shooting at a Maryland newsroom. Fox News is reporting that there are multiple fatalities and an arrest might have been made. Ron Bateman, Sheriff of Anne Arundel County, spoke with Shepard Smith recently and gave him a preliminary report. We’ll keep you updated.

LATEST (Lauretta): Local police officials revealed Thursday evening that the shooting was a "targeted attack" on the Capital Gazette and that the paper had received threats prior to the shooting. They say the suspect was in his thirties but they will not release further details until Friday morning as their investigation is still ongoing.

The suspect has also been identified as 38-year-old Jarrod Ramos. He sued The Capital in 2012 for defamation, which was dismissed in court.

NBC News: The shooting suspect's name is JARROD RAMOS. 38 years old. He was identified by multiple law enforcement officials to NBC News. He had sued the paper in 2012 for defamation. Case was tossed by a judge. @Tom_Winter @MSNBC

The victims have been identified as well:

UPDATE: The shooting occurred at the offices of the Capital Gazette. It’s owned by the Baltimore Sun. It’s been around since 1884. Anthony Messenger, an intern at the Capital, tweeted about the shooter, pleading for assistance on Twitter.

Oh My God. From a newsroom in Maryland. https://t.co/td8KmHCBAd

BREAKING: Multiple fatalities in newsroom shooting in Annapolis, Maryland, according to local Sheriff

UPDATE II: ATF is responding to the scene. The bomb squad is reported en route to fully secure the area. There are reports that at least six people are reported to be shot. President Trump has been briefed on the incident.

WATCH: People seen walking out of Capital-Gazette building in Annapolis, Maryland, after reports of an active shooter. https://t.co/eWjaC4dGlq pic.twitter.com/a4KXTYzVMQ

BREAKING: ATF Baltimore is responding to a shooting incident at the Capital Gazette in Annapolis, Md. pic.twitter.com/GQ1bMAejzQ

We are investigating reports of an incident at the Capital-Gazette building in the 800 block of Bestgate Road in Annapolis. We will share details as we confirm them.

BREAKING: At least six people are injured in shooting at Capital Gazette. https://t.co/D9J6wdeIYB

Pres Trump briefed on shooting incident at Capital Gazette offices in Maryland. Offers thoughts and prayers for the victims, says @LWalters45. @POTUS now on the way back to DC from Wisconsin.

UPDATE III: Gov. Larry Hogan has responded to this tragic shooting, saying he’s “absolutely devastated.” Phil Davis, a crime reporter for The Capital, is tweeted, “A single shooter shot multiple people at my office, some of whom are dead…[the] gunman shot through the glass door to the office and opened fire on multiple employees. Can't say much more and don't want to declare anyone dead, but it's bad.”

“There is nothing more terrifying than hearing multiple people get shot while you're under your desk and then hear the gunman reload,” he added. The Capitalis also reporting on this incident as well.

#update confirming active shooter at 888 Bestgate Road in Annapolis. Building evacuated. Officers continuing to search building. Relocation point is inside Lord and Taylor in the mall.

Absolutely devastated to learn of this tragedy in Annapolis. I am in contact with County Executive Steve Schuh, and @MDSP is on the scene assisting @AACOPD. Please, heed all warnings and stay away from the area. Praying for those at the scene and for our community. https://t.co/bI6PdUjHfh

I will tweet what I can while I wait to be interviewed by police.

A single shooter shot multiple people at my office, some of whom are dead.

Gunman shot through the glass door to the office and opened fire on multiple employees. Can't say much more and don't want to declare anyone dead, but it's bad.

Capital Gazette just posted a story about the shooting at their own newspaper. Still doing their jobs and reporting the news under awful circumstances. pic.twitter.com/aPFu67ZACB

UPDATE IV: NYPD has dispatched units to the headquarters of all major newsrooms in the city out of caution. CBS News is reporting that four people are dead. Shooter has been apprehended, according to Annapolis officials.

#BREAKING: NYPD says it is stationing officers outside the headquarters of major newsrooms throughout the city out of an abundance of caution following shooting at newspaper office in Maryland

NEW: NYPD moving units to all major media outlets in NYC out of an abundance of caution in response to Maryland shooting - @AaronKatersky https://t.co/ivi7CqqvVH

UPDATE V: Anne Arundel County Executive Steve Schuh said several people have been killed. He thanks first responders who arrived at the scene within 60 seconds. Suspect is still being interviewed by detectives.

"There are several people who have DIED from this incident," Anne Arundel County Executive Steve Schuh says. #Annapolis #BreakingNews

UPDATE VI: The number of casualties has been updated. At least five people have been killed. It's now one of the deadliest attacks on journalists in American history. Trump responds, saying thoughts and prayers are with the victims and their families. He also thanked the first responders.

At least five killed in shooting at Maryland newspaper office, in one of the deadliest attacks on journalists in U.S. history. https://t.co/zYS8aVG9bz via @WSJ

#LATEST: 5 confirmed dead at The #CapitalGazette in #Annapolis, Maryland. Shooter in custody. Officers arrived within 60 seconds. As many as 20 injured. Gunman shot through glass door to enter newsroom. Then started shooting. #BREAKING

UPDATE VII: Jim DeButts, editor for the Capital Gazette, tweeted that he was “devastated and heartbroken,” but that his reporters are passionate, they will continue to report the news, and nothing will prevent them in accomplishing that goal. That is their mission.

Devastated & heartbroken. Numb. Please stop asking for information/interviews. I’m in no position to speak, just know @capgaznews reporters & editors give all they have every day. There are no 40 hour weeks, no big paydays - just a passion for telling stories from our communty.

We are there in times of tragedy. We do our best to share the stories of people, those who make our community better. Please understand, we do all this to serve our community.

We try to expose corruption. We fight to get access to public records & bring to light the inner workings of government despite major hurdles put in our way. The reporters & editors put their all into finding the truth. That is our mission. Will always be.

Correction: Fingertips angle has been corrected by CBS News. Shooter's fingerprints were not damaged.

The initial version of this story published Thursday evening reported that the suspect had "damaged" the tips of his fingers in an attempt to prevent identification, citing a law enforcement official. On Friday, Anne Arundel County Police Chief Timothy Altomare said that there was a lag in identifying the suspect using fingerprints, and that facial recognition technology was used. But he said that "there was no alteration to his fingerprints." This story has been updated.