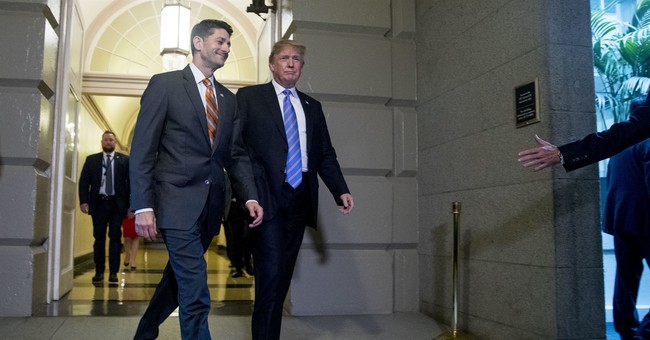 President Trump met with Speaker of the House Paul Ryan this afternoon. Yes, we have committee hearings about the Department of Justice’s Inspector General report that torched the FBI and James Comey, but two huge immigration bills will be voted on this week. It’s part of a deal to avoid a discharge petition, which would have forced immigration votes without the blessing of the GOP leadership. You need 218 signatories; this push was just three shy of that. Every Democrat and a significant amount of moderate Republicans signed onto deal with the so-called DREAMers, those shielded by the constitutionally shaky Obama-era Deferred Action for Childhood Arrivals program. The Trump White House says they back both bills. It’s political suicide to do so. We’ll see what happens.

Trump was on the Hill meeting with GOP leaders today. As he was walking to Speaker Ryan’s office, some woman in the rotunda decided to yell, “Mr. President, f**k you.”

Was it an intern, or a congressional aide, or a tourist? We don’t know. It did occur after 4:30 P.M. In that case, the rotunda is closed. Fox News’ Chad Pergram tweeted it had to have been an aide or intern since their pass grants them access to this area of the Capitol after hours.

The woman who heckled the President most likely had to either be an intern or aide. Someone with a hard Congressional pass allowing access to the Rotunda area after hours. The Capitol closes to public tours ar 4:30 pm et.

Should this woman be thrown in jail? No. Is it free speech? Yes. But for the Left who complains about how public discourse is breaking down because Hillary didn’t win the 2016 election, shouting “f**k you” to the president of the United States pretty much seems to undercut that argument. And it’s not just this woman. Robert de Niro said “f**k Trump” at the Tony Awards to a thunder applause. And yes, the Hollywood Left is the pulse of this movement. If a Republican had done this, this would be in the news cycle for days. Whatever the case, this outburst certainly got the attention of the Secret Service, as seen in the video. Capitol Police are reportedly looking for the woman as well. Let her be. Let her have her 15 minutes of fame. And we can thank her in 2020 when Trump wins a second term.

I remember a simpler time when the MSM disapproved of those heckling the President pic.twitter.com/6YRrEYYdVf

Yet, bookmark this for whenever someone, especially a liberal, complains about the breakdown of civility under Trump. You people yelled “f**k you” at the president. Your mask of sanity is beginning to slip, left-wingers.

US Capitol Police on lookout for young white woman who yelled “Mr. President, f— you!”