Trump on IG Report: There Was A'Total Bias' And A Plot Against Me 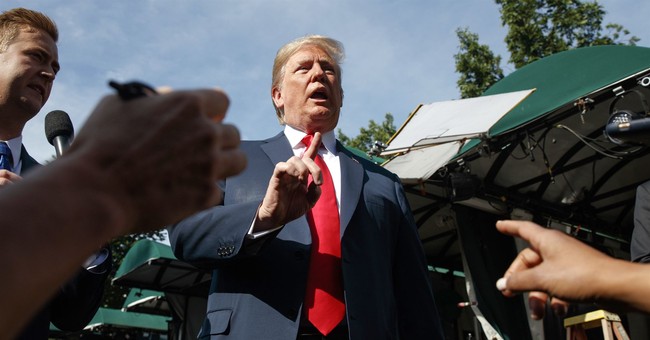 Leah touched upon this earlier this morning. President Trump broke his silence on the latest report on the FBI/DOJ in which Inspector General Michael Horowitz torched James Comey for his actions that went way outside FBI protocol and were labeled extraordinary and insubordinate.

“The IG Report is a total disaster for Comey, his minions and sadly, the FBI. Comey will now officially go down as the worst leader, by far, in the history of the FBI,” said the president in a tweet, while offering support for current FBI Director Christopher Wray in rebuilding the agency’s credibility. He will “bring it proudly back!” added Trump.

Speaking with Fox News’ Peter Doocy, President Trump said that the report shows there was “total bias,” and that the FBI was “plotting against” his election. He also blasted the “scum”who headed the FBI/DOJ under Obama (via AP):

President Donald Trump says the Justice Department watchdog report on the Clinton email probe shows the FBI was biased against him “at the top level” and was “plotting against my election.”

Trump is giving an impromptu interview with Steve Doocy of “Fox & Friends” on the North Lawn of the White House Friday. He says of the report: “That was the most biased set of circumstances I’ve ever seen in my life.”

The inspector general report, while damaging to the FBI and to Comey personally, does not support Trump’s allegation that political preferences influenced the conduct of the email investigation into his Democratic presidential rival.

Trump tells Doocy: “The end result was wrong. There was total bias.”

The IG Report is a total disaster for Comey, his minions and sadly, the FBI. Comey will now officially go down as the worst leader, by far, in the history of the FBI. I did a great service to the people in firing him. Good Instincts. Christopher Wray will bring it proudly back!

FBI Agent Peter Strzok, who headed the Clinton & Russia investigations, texted to his lover Lisa Page, in the IG Report, that “we’ll stop” candidate Trump from becoming President. Doesn’t get any lower than that!

Now, the liberal media will probably go ballistic, citing the no bias found talking point that was disseminated yesterday. But this is a fantastic lie. Of course, there was bias; the IG report simply said they couldn’t find evidence in which this impacted the investigation (i.e. responsible for generating a partisan outcome). As Kim Strassel noted in her columnin The Wall Street Journal, the OIG couldn’t find anyone jotting down “Let’s start this Trump investigation so we can help Hillary win.”

But bias against Trump within the halls of the FBI is undeniable. Look no further than the FBI employees calling Trump voters, “lazy” and “pieces of s**t.”

“Trump’s supporters are all poor to middle class, uneducated, lazy POS that think he will magically grant them jobs for doing nothing. They probably didn’t watch the debates, aren’t fully educated on his policies, and are stupidly wrapped up in his unmerited enthusiasm,” one FBI employee said.

When you have a top counterintelligence agent, Peter Strzok, telling bureau lawyer Lisa Page, with whom he was having an extramarital affair, “we’ll stop it” in referring to a Trump presidency—that’s incredibly problematic. It forms the crux of the allegations themselves, as Strzok signed off on the counterintelligence probe into Russian collusion in July of 2016, an investigation now headed by Special Counsel Robert Mueller. He was also involved in the Hillary email probe, and the two also said they feared the bureau was going too hard after her. Page and Strzok sent each other tens of thousands of texts and when they became known, Mueller removed Strzok from the Russia probe. He’s now in human resources. Page resigned in May, but there’s other allegations still surrounding the FBI, namely that they had an informant spying on the campaign. It’s an allegation the intelligence community denies, but what would you call someone trying to glean information from someone else under false pretenses and relaying it back to a higher source, which in this case is the FBI? What would you call that activity?