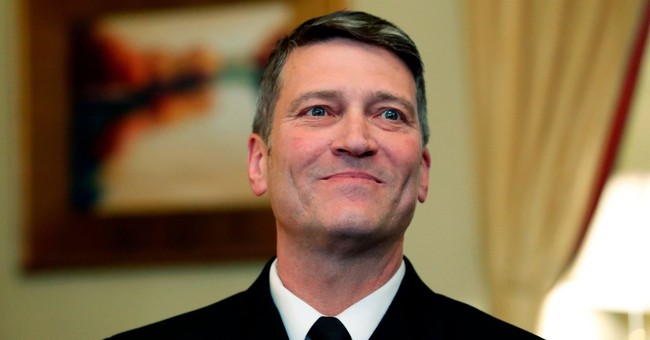 UPDATE: White House says the reports of Dr. Jackson leaving his post as the president's personal physician are false.  Katie will have more on this later.

White House says reports about Dr. Ronny Jackson leaving his position as Trump’s physician are false and that there are no staff changes at this time

If certain allegations, like pill pushing, drunkenness, and hostile work environment, pan out to be true, then of course that person should be phased out. In fact, that person shouldn’t even be near a government post, or treating the president of the United States, his staff, and members of the White House Press Corps concerning any medical situations. For Rear Admiral Ronny Jackson, Trump’s Veterans Affairs nominee, he faced such brutal accusations from Sen. Jon Tester (D-MT), which hold no merit. The most damning are that he trashed a government vehicle while drunk, had a cavalier attitude towards handing out prescription drugs, and banged on a female colleague’s door so violently that it grabbed the attention of the Secret Service while on a foreign trip during the Obama administration.

CNN’s Dana Bash and David Gregory said that the media should tread carefully and walk slow with the pill-pushing allegation, noting that Tester may have overreached. As for the door banging and car wrecking allegations, the Secret Service has found zero evidence to corroborate any of this occurred. It looks like fake news and gossip torched Jackson. It killed his nomination to be VA secretary; he withdrew prior to confirmation hearings. This was a character assassination executed by Senate Democrats. And now, it’s the end of the line for him. He will no longer be treating President Trump (via Politico):

White House physician Ronny Jackson will not return to his role as the president’s personal physician, according to two senior administration officials, after a string of allegations caused the Navy rear admiral to withdraw his nomination last week to lead the Department of Veterans Affairs.

Sean Conley, a Navy officer who took over Jackson’s role as the president’s personal doctor last month, will continue in the role, the officials said.

Jackson bowed out last week after Montana Sen. Jon Tester, the top Democrat on the Veterans’ Affairs Committee, released a document summarizing allegations by current and former colleagues that Jackson overprescribed pills, drank on the job and created a hostile work environment. Jackson has denied the allegations and has returned to work in the White House Medical Unit.

President Donald Trump has continued defending Jackson, with whom he formed a tight personal bond.

Jackson had served as President Obama’s personal doctor as well. Funny how he became a must-kill target for the Left, though with resistance fever catching on throughout the Democratic Party—anyone who becomes part of the administration is a potential target.