Pollster: Democrats Might Pay For Endless Scowling During Trump's Speech 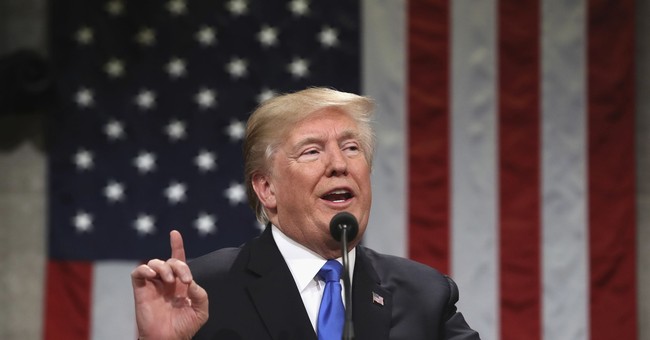 They said he was unstable. They said he was dangerous. Well, that narrative that the liberal media has been crafting for weeks was torpedoed in about 90 minutes last night when President Donald J. Trump delivered his State of the Union address. Liberals were already going apoplectic over it, with more than a few suggesting that no matter what he says—it’s not presidential. Amid the tantrum came one of the most appalling displays by an opposing party in recent memory. Democrats sat there, silent, fuming, and still sour over the fact that Hillary Rodham Clinton would a) never become president; and b) never deliver the speech Trump delivered last night.

.@guypbenson on #SOTU: Democrats "looked like they were at a funeral. They could barely look at [@realDonaldTrump]." https://t.co/UMlR1sGoxS @foxnewsnight pic.twitter.com/BcGHx7C3CC

I know Ds aren't happy with Trump policies, but i can't see how it is a good look to refuse to applaud good economic news, bonuses, capital investment. #StateofOurUnion

They sat on their hands, with Rep. Nancy Pelosi (D-CA) and Sen. Chuck Schumer (D-NY) looking as if they did not have enough fiber in their diet; they were miserable.  As were the rest of congressional Democrats, who sat for supporting our flag, our national anthem, economic growth, defeating ISIS, job creation, and tackling the opioid epidemic. They sat on their hands, which pollster Frank Luntz said could have been a monumental blunder.

“This speech is going to have a measurable impact on Trump's favorability and popularity.  He's saying exactly what people want to hear,” he tweeted during the State of the Union. “Whoever told the Democrats to sit on their hands made a huge mistake,” he added.

This speech is going to have a measurable impact on Trump's favorability and popularity. He's saying exactly what people want to hear.

Whoever told @TheDemocrats to sit on their hands made a huge mistake. #SOTU pic.twitter.com/6vYeFJOyMp

Tonight, I owe Donald Trump an apology. Tonight, I was moved and inspired. Tonight, I have hope and faith in America again.

It may go away tomorrow…
But tonight, America is great again. #SOTU

Even in foreign policy and national security, this speech a perfect blend of strength and empathy. These heroic stories break our hearts, but sturdy our resolve.

This is the Trump his voters wanted him to be. #SOTU

This speech represents the presidential performance that Trump observers have been waiting for – brilliant mix of numbers and stories, humility and aggressiveness, traditional conservatism and political populism.

Only one word qualifies: Wow. #SOTU

I have criticized the President's language a lot in recent months.

But tonight is Donald Trump at his very best. He's personalized his language and policies better than I've ever seen. #SOTU

Luntz also noted how Trump was able to push populism, conservatism, and anecdotes to support his agenda.

“This speech represents the presidential performance that Trump observers have been waiting for – brilliant mix of numbers and stories, humility and aggressiveness, traditional conservatism and political populism,” he said. Luntz added that while the feeling might dissipate in the coming days, he felt inspired by Trump’s speech. He’s not alone.

Trump’s reception of his speech was through the roof, with CBS News reporting that 75 percent approved of it, 54 percent credited Trump for the economy, 54 percent said the polices he outlined would help them, and 65 percent said the speech made them feel proud. If there’s one thing that’s beyond dispute, Trump is a cheerleader for America, which was absent under Obama. Oh, and eight in ten of Americans who watched the address felt that the president was trying to unite the country.

This was a "big" SOTU. So many are laundry lists. This was big thoughts on economy (taxes/deregulation/jobs). Big thoughts on foreign policy (bad guys vs American values). A few big bipartisan pitches going forward (infrastructure/immigration). And relentlessly optimistic.

Sorry, Democrats—you lose again. He’s truly the Teflon Don—and if he continues to get credit for the economy, specifically the dividends yielded by this tax reform package, and boosts his popularity; the 2018 midterms could become interesting.