Real Clear Politics: No, The Kansas Special Election Wasn't A 'Warning Shot' For The GOP 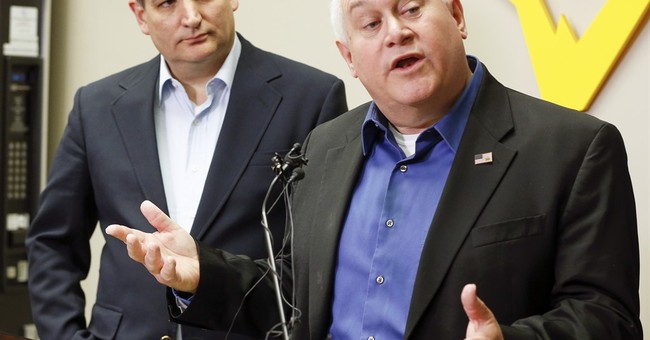 It's not a warning shot because the ominous signs might be staring right in the GOP's face, though this moral victory by Democrats claim in Kansas might just be un-measurable, dotted with moving goal posts. Ed will have more on that in a second, but Kansas and Georgia seem to be bellwethers for the 2018 midterms, despite special elections being bad indicators for broader results. Moreover, there are other factors that played a role in Kansas’s special election for its 4th congressional district race that was on April 11. In that contest to replace Rep. Mike Pompeo (R-KS), who became the director of the Central Intelligence Agency, Republican Ron Estes beat his Democratic opponent James Thompson by seven points. Still, many were saying how this could spell doom for the GOP come 2018. Here’s The New York Times’ Nate Cohn’s even though ‘the GOP won, they lost’ analysis:

The small and imperfect lesson of Tuesday’s special election in Kansas is that the Republicans might be in quite a bit of trouble. Mr. Estes’s seven-point victory is extremely poor for this district, whether under politically neutral circumstances or an environment deeply unfavorable to the president’s party. Even with Mr. Trump’s approval rating around 40 percent, Mr. Estes should still have been considered a 20-plus-point favorite in the district.

There are extenuating circumstances, as there often are. The Kansas Republican Party is deeply unpopular under the leadership of the governor, Sam Brownback, and Mr. Estes is the state treasurer in Mr. Brownback’s administration.

Nonetheless, it is a stretch to argue that the entirety of the difference between Mr. Estes’s result and what you would expect under politically neutral circumstances can be attributed to his connection to Mr. Brownback.

I don’t know where the “fare well” aspect is coming from concerning Democrats in special election. They’re so far 0/4 in flipping seats in special elections in blue states post-2016. In Louisiana, a State House district flipped to Republicans; the seat was safely in Democratic hands…since 1972. Moreover, the Brownback factor also muddies the overarching projections and analysis for this race. Special elections are weird. They’re not all that reliable to read the tealeaves. So, before the Left gets too excited, they should read Real Clear Politics’ Sean Trende.

He also made the note that a) special elections are not the best predicators; and b) Estes was the state treasurer under Republican Sam Brownback, who is deeply unpopular in the state. Trende added another interesting aspect. Thompson didn’t run as a conservative Democrat, but he did stress his support for gun rights, taking a more right-leaning stance towards illegal immigration, support for law enforcement, and balanced it out with support for gay rights. It seems that support for Second Amendment rights and immigration enforcement could shake the stigma that Democrats are hyper left in these races that are decided by local factors. Is the key for 2018 Democrats running to the right of the Clinton, Warren, Schumer, and company? Yeah, it could held in the rural districts that the Democratic Party desperately needs to reclaim in order to survive. At the same time, it’s hard to see the Democratic Congressional Campaign Committee (DCCC), the Democratic Senatorial Campaign Committee (DSCC), or the overall Democratic National Committee apparatus endorsing anyone who supports gun rights or immigration enforcement besides a token line in a press release.

This is a bit over the top. https://t.co/L5UL3xpShw

Trende had three charts for his analysis. One shows that Estes ran around nine points behind Trump’s share of the vote from 2016—Trende did a graph with the various counties in the Kansas 4th—noting that it could spell disaster for the GOP. Yet, how did he match up with Sen. Pat Roberts (R-KS)’s 2014 numbers? Estes ran equal to him. Trende added that a three-point deficit with these figures would mean the GOP would lose just a few seats. Still, what about the fact that Roberts ran against an independent in the last few weeks of the election? Would things have been different if Roberts ran against a solid Democrat? Truth be told, for most midterm projections, one only has to look at the president's approval ratings, not a special election in Kansas (or Georgia).

Estes overall ran better than Gov. Sam Brownback did in 2014, and Brownback had a Democratic opponent. So if we use the 2014 elections as our baseline, this district actually looks pretty good for Republicans. Which one should we use? It’s hard to say! One of the critical features of this election was that the Republican nominee was the state treasurer. Given Brownback’s widespread unpopularity, and the significant budget hole that could be (perhaps unfairly) attributed to Estes, it isn’t surprising that Thompson ran well.

If you are really looking for bad news for Republicans, it is probably that, regardless of the comparison, Estes ran behind other Republicans in Sedgwick County. This could be evidence that urban Democrats were enthused to vote, or it could be evidence that Republican vote shares have continued to decline among college-educated whites. Neither is particularly good news for the GOP, although the latter is probably worse, since a large number of the competitive districts in 2018 will probably feature large numbers of college-educated white voters.

The big picture, however, is that it is very easy to miss the forest for all of the trees here. The forest is that midterm elections correlate heavily with presidential approval rating, and Donald Trump’s approval rating is in the low 40s. If this state of affairs continues, Republicans will likely find themselves in real danger of losing the House. We didn’t need a special election to know that.

All of that is true, though Rasmussen has Trump’s approval near 50 percent. We’re still a long ways away from the 2018 season, but I’ll leave you this from Ed Morrissey, who undercuts the notion that this is a moral victory for Democrats:

Don’t forget too that this was a special election, where short cycles and low turnouts produce unusual results. Around 121,000 votes got cast yesterday, as opposed to the 275,000+ that turned out in November to give Trump his big win in KS-04. Special elections favor organized activists more than regular elections do because of the significantly lower turnout they produce, and progressive activists had targeted this seat for quite a while. Democrats nearly caught Republicans napping and came close to plucking one seat away from the GOP’s majority, but … they didn’t, and in the end didn’t really come close — even with the head start and organizational advantage. But then again, that’s the great advantage of moral victories. They don’t actually have to adhere to metrics or even reality, but merely to the shifting goalposts of those who claim them.

With Estes win, we now move on to tomorrow’s contest in Georgia's 6th congressional district, which is a must-win for Democrats, though it looks like we’re heading to run-off territory. It's to decide who will replace Rep. Tom Price who became Trump's health and human services secretary. Right now, Jon Ossoff is the leading Democrats against a massive slate of Republicans, which is preventing them from rallying around a consensus candidate. Yet, RedState’s Jay Caruso, a Georgia native, tweeted that if Ossoff fails to get 51 percent tomorrow, he’s toast. Ossoff has run into trouble, like lying about his national security clearance and the fact that his campaign is pretty much funded from people who don’t live in Georgia, so you can bet that this will be used to attack him mercilessly should a run off occur. Nate Cohn also noted that early voting totals, which heavily favored Democrats have virtually been erased as of late—and that we could be heading to Kansas-04 territory come election night. Guy will have a more in-depth analysis on this tomorrow, though he noted today on Fox News’s Outnumbered that Trump only won this district by only a point. So, while this is a Republican district, it’s not one that’s enthused by the president. Stay tuned.

1/ All this pontificating about GA-6. Let’s break it down simply.

Only chance Ossoff has is next week. If he doesn’t crack 50% he’s done

2/ GA-6 is not Trump country. Period. That’s the only reason Hillary did well. In June, they’ll vote GOP.

It won’t be close.

Right now, we're headed for a KS-04 election night redux in GA-6. Ossoff might be up >20 in the E.V. (Assumes Ossoff at 46 in midterm elect) pic.twitter.com/KsXi7mZTQA