Sanders: Senate Democrats Are Not Trying To Filibuster Gorsuch. WaPo: That's Pretty Much A Lie 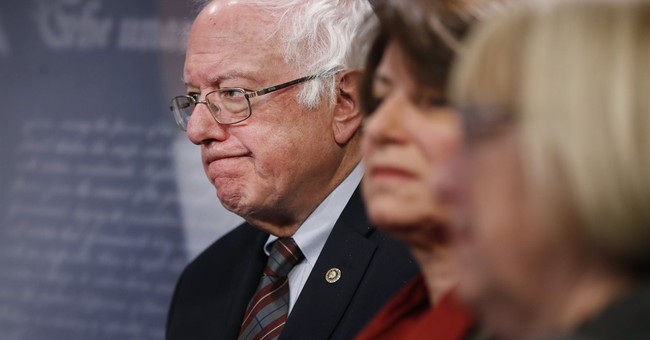 More Senate Democrats are lining up to block the Supreme Court nomination of Judge Neil Gorsuch. Sen. Jeanne Shaheen (D-NH), Maggie Hassan (D-NH), Dick Durbin (D-IL), Bill Nelson (D-FL), to name a few. Prior to Sen. Chuck Schumer’s announcement that he would filibuster Gorsuch, Shaheen once supported a hearing and a vote for him, as did Durbin. Sen. Patrick Leahy (D-VT) said that he isn’t inclined to support a filibuster, but added that if Gorsuch’s answers to their questions aren’t “real,” he might be subject to one. Sen. Bernie Sanders (I-VT) tried to tell CNN’s Dana Bash that his party isn’t filibustering Gorsuch, which The Washington Post rated as “mostly false,” earning him three Pinocchios.

The exchange, which occurred on March 26:

Sen. Bernie Sanders (I-Vt.): “It’s not a question of filibuster. I am for the Republicans obeying the rules that currently exist, and not changing those rules. And the rules right now, for good reasons, are 60 votes.”

Dana Bash: “Well, okay. The rules do allow for a filibuster for the Supreme Court nomination, but it certainly doesn’t require Democrats to use that.”

Bash: “Because that’s what it is.”

Sanders: “All it is, is there will be — no, it is not. There will be a vote. If he doesn’t get 60 votes, he does not become Supreme Court justice. That’s the rule right now. It’s not like people are going to be there standing for months and months, bringing down the government. That is what the current rule is. And I think it’s important that it be maintained.”

The verdict was that Sanders was using technical language to an “absurd extreme.” Of course, they’re trying to filibuster Gorsuch. Schumer made that announcement. And the Left has to know that this isn’t going to stop Gorsuch. He will be confirmed. Senate Republicans will nuke the rules of the Senate, completing the work that Harry Reid started, and allow the Supreme Court nomination to pass with a simple majority. Sens. Orrin Hatch (R-UT) and Lindsey Graham (R-SC) either heavily insinuated or, in the case of Hatch straight-up said that they will go nuclear to get Gorsuch confirmed—come hell or high water. The queen of the center in the Senate—Sen. Susan Collins (R-ME)—even expressed a willingness to change the rules for Gorsuch. Scores of liberals, including Obama’s former solicitor general, and editorial boards across the country have supported his nomination to the Court. The political cover is vast for Republicans to do this—and they should do this if Democrats continue playing these games without precedent. They may think it’s BS, but Sen. Joe Biden was a senator and he did issue the Biden rule, stating that no Supreme Court nominations should be entertained during an election year. Democrats—with this filibuster attempt—are trying to say, either knowingly or unknowingly, that this rule extends to whenever, which is precisely wrong. Also, they need to get over Senate Republicans blocking Obama’s initial pick to fill the vacancy, Merrick Garland, which is one of the reasons why many probably supported Schumer’s call to arms. They’re still sour over it. Get over it, fellas and ladies. You got beat. And you’re going to get beat again. Only this time the GOP will have little to no fight filling a possible second vacancy with someone who is probably your worst nightmare concerning legal philosophy.

Another CRS report says that there are “no specific rules for filibustering,” but it is often used to refer to senators “holding the floor in extended debate. More generally, however, filibustering includes any tactics aimed at blocking a measure by preventing it from coming to a vote.”

Sanders is using the technical language of arcane Senate procedures to an absurd extreme. He claims that Democrats are not engaging in a filibuster when they demand 60 votes from the Senate before a vote on the nomination can be held. Instead, he says that Republicans need to “invoke cloture” to bring the nomination to a vote — which is a technical way of saying they need to bring a filibuster to an end before a vote can take place. (Only in rare circumstances anymore do senators seek to hold the floor in continuous debate.)

Sanders was perfectly happy to call Republicans’ demands for 60 votes “filibusters.” He should admit that’s what’s happening now, rather than engaging in verbal gymnastics to obscure the truth.

Once again: There is no “traditional” 60-vote “standard” or “rule” for Supreme Court nominations, no matter how much or how often Democrats claim otherwise.