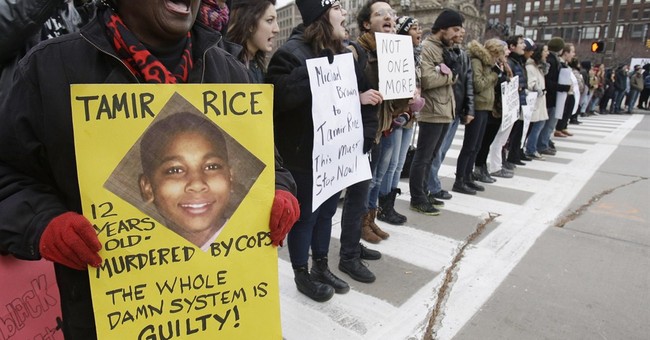 A Cleveland judge found that Officers Timothy Loehmann and Frank Garmback should be charged in the shooting death of 12-year-old Tamir Rice. Loehmann was charged with murder, while Garmback was charged with negligent homicide (via NBC News):

Cleveland Municipal Court Judge Ronald Adrine also found cause to support negligent homicide charges against Officer Frank Garmback, Loehmann's partner, who is accused of standing by after Loehmann shot Tamir in November at a recreation center, where Tamir was playing with a pellet gun.

Adrine agreed with local activists who took the unusual step of independently seeking charges because they'd lost confidence in the grand jury process.

Yet, the judge ruled that only probable cause existed; he lacked the authority to issue arrest warrants for the officers since the prosecution needs to sign off on the process. According to the New York Times, the legal mechanism used to spur Judge Ronald B. Adrine’s decision in this matter revolved around a rarely used Ohio law that allows a private citizen to file an affidavit with the court if he or she has “knowledge of the facts.” Cuyahoga County prosecutor Timothy J. McGinty has already said that the decision to file official charges rests with the grand jury:

This week, a group of activists and community leaders asked the Municipal Court to have the officers, Timothy Loehmann and Frank Garmback, arrested under a little-used Ohio law that allows “a private citizen having knowledge of the facts” to start the process by filing an affidavit with a court. They argued that the widely seen video of an officer killing Tamir had given nearly everyone “knowledge of the facts.”

On Thursday, Judge Ronald B. Adrine issued an order saying that probable cause existed to charge the officers, and “this court determines that complaints should be filed by the prosecutor of the City of Cleveland and/or the Cuyahoga County prosecutor.” What weight the order carries with the prosecutors is unclear.

The ruling puts prosecutors in a difficult position, deciding whether to bring charges in a high-profile case when a judge has already said that probable cause exists to do so.

In a statement, the Cuyahoga County prosecutor, Timothy J. McGinty, said the case, “as with all other fatal use of deadly force cases involving law enforcement officers, will go to the grand jury.”

Ultimately, Mr. McGinty said, any decision to file charges will rest with the members of a grand jury.

The petitioners argued that the statute allowed ordinary citizens to bypass the police and prosecutors, and force arrests; if they showed probable cause that a crime had been committed, they said, then the court had no choice but to order the officers arrested.

But the judge said there was a conflict between the law and the rules laid down by the State Supreme Court, so he could not issue warrants without a prosecutor’s complaint.

The Rev. Jawanza K. Colvin, a Cleveland pastor who filed affidavits in the case, said that the findings of probable cause showed that residents could have their concerns taken seriously by the courts.

“It is a step, and it is a step that tells those who have continued to work for justice in the criminal justice system that all lives do matter,” Mr. Colvin said.

A lawyer for the Rice family, Walter Madison, said Tamir’s relatives were “overwhelmed” by the findings and “cannot believe that the system has actually worked in their favor.”

“Albeit a small step toward justice, it is a step nonetheless,” Mr. Madison said.

On November 22, 2014, someone dialed 911, reporting that a person, who tuned out to be Rice, was carrying a gun at a park in Cleveland. Officers Loehmann and Garmback responded, with Loehmann shooting Rice in the abdomen; he succumbed to his injuries the following day. The Washington Post  reported in December that Rice’s family has also filed a wrongful death suit, claiming that Rice was on the ground for nearly four minutes before he was given medical attention.

Officer Loehmann’s “dismal” handgun performance qualification was also mentioned in the article. The firearm turned out to be a toy airsoft gun. The orange safety cap had been removed.

Over at Hot Air, Allah mentioned that it’s sort of hard how the judge couldn’t suggest a murder charge given the amount of latitude in Ohio’s statute–and the fact that it was established the toy gun presented no mortal danger to Officer Loehmann.

(A) No person shall purposely cause the death of another or the unlawful termination of another's pregnancy.

(B) No person shall cause the death of another as a proximate result of the offender's committing or attempting to commit an offense of violence that is a felony of the first or second degree and that is not a violation of section 2903.03 or 2903.04 of the Revised Code.

(C) Division (B) of this section does not apply to an offense that becomes a felony of the first or second degree only if the offender previously has been convicted of that offense or another specified offense.

(D) Whoever violates this section is guilty of murder, and shall be punished as provided in section 2929.02 of the Revised Code.