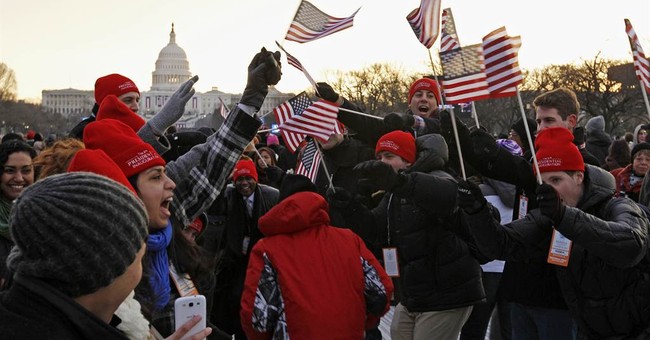 The NSA’s recent surveillance program has been ruled illegal, and millennials I guess are cheering with joy. They’re the demographic more opposed to the collection of bulk call data, but a substantial proportion of them still think the businesses are keeping their information safe in a new Gallup poll. As Hunter Schwarz of the Washington Post wrote that it “defies all logic and reason:”

Even though millennials are generally distrustful and more likely to be concerned about government privacy -- not to mention things like recent security breaches at major retailers like Home Depot and Target, the "Fappening" and the Sony hack, evidence Uber has previously used its ability to track customers, and everything we've learned about how government monitors phone and online records, which a court recently found illegal -- for some reason, more than four out of 10 say they think businesses protect their privacy.

Gallup had a few theories. One of them is that millennials might have a lower expectation of security because they're aware everything they do is online. Another is that they trust information will be protected because they've grown up with computers, the Internet, smartphones and apps. A third is that they are being young and naive. It could also be optimism. For a generation that keeps its photos, texts, travel routes, guilty-pleasure music playlists, purchases and secrets all on a single device, you hope it's all being kept private. It's not like any of us are going back to living a pre-smartphone lifestyle anytime soon.

Yet, let’s go through some other areas where millennials are somewhat dazed and confused.

In February, we found that the majority of millennials didn’t know their U.S. Senator:

In Fusion’s “Massive Millennial Poll” released on Tuesday, 77 percent of Americans between 18 and 34 could not name one senator in his or her home state. Twenty-three percent answered the question correctly. Men were more likely than women to name their senator, with 25 percent of men and 20 percent of women answering the open-ended question correctly. Women were more likely to answer that they did not know rather than name the wrong senator (an answer of “I don’t know” was counted as an incorrect response). The number is even lower among younger millennials. Of those ages 18 to 24, only 18 percent knew the name of their senator.

The sample size was 1,000 people, the minimum for a nationwide poll. That’s horrifying given that such information can be easily obtained through Google, but I digress.

One-third of millennials view socialism favorably? According to a YouGov poll, 36 percent of Americans under age 30 have a positive view of socialism, while 39 percent have similar feelings about capitalism. Now, before we all go ballistic, the Reason Foundation wrote in July of 2014 that only 16 percent of Americans under the age of 29 can properly define socialism. Nevertheless, they also found that millennials are pretty much a mess when it comes to political positions:

Young people support big government, unless it costs any more money. They're for smaller government, unless budget cuts scratch a program they've heard of. They'd like Washington to fix everything, just so long as it doesn't run anything. That's all from a new Reason Foundation poll surveying 2,000 young adults between the ages of 18 and 29. Millennials' political views are, at best, in a stage of constant metamorphosis and, at worst, "totally incoherent," as Dylan Matthews puts it. It's not just the Reason Foundation. In March, Pew came out with a similar survey of Millennial attitudes that offered another smorgasbord of paradoxes:

There are a few silver linings. A) In the YouGov poll, there are more free market millennials, but not by much. B) A Reason-Rupe poll noted young Americans become more fiscally conservative once they (shocker) begin making more money in the workplace. C) When it comes to abortion and gun control, millennials aren’t trending towards the left; they pretty much fall in line with other generations’ attitudes on those issues.

So, yes, millennials are quite chaotic in their political orientation. They like socialism even though they do know what it is–and they can’t name their representatives in Congress. They also support the idea of universal health care, but don’t like Obamacare.

At the same time, a lot of them are engaging in a crusade on free speech by pointing out so-called microaggressions and creating “safe spaces” when conservatives are invited to speak on their respective campuses. It’s insanely frustrating.

Nevertheless, the vast majority of millennials do no support affirmative action programs, calling them “unfair.” And, while they support big government, they’re more open to privatizing programs like Social Security and Medicare. It appears that while, overall, millennials are liberal; there are some cornerstones of liberalism they simply reject, especially the ones who begin making between $40k-60k a year. That’s the income range where the idea of redistribution among millennials begins to fall.

Nevertheless, the overall picture is quite…disturbing.

**This was crossposted from HotAir**