Oberlin College And The ‘Safe Spaces’ For Temper Tantrums 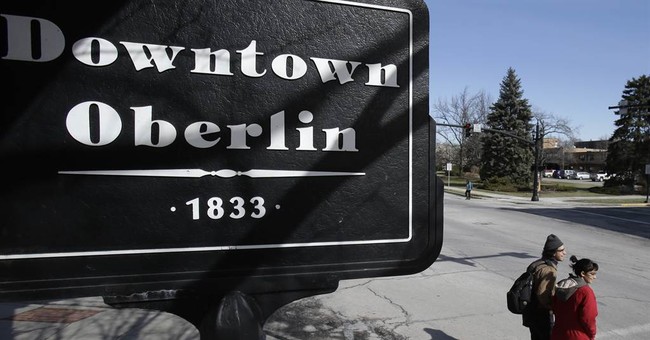 It’s a sad commentary when speakers are invited to certain institutions of higher learning, only to be met with jeers, mockery, and downright rude behavior on behalf of the student body. What are students afraid of when a conservative comes to campus? In fact, the same can be said for any person from any political affiliation. Now, we have trigger warnings and “safe spaces” to prevent conversation and debate on serious issues. More disturbingly, it cannibalizes freedom of speech; you cannot say you're for a certain type of speech and not another. It doesn’t work that way. If you’re uncomfortable, then don’t go to the event. It’s not mandatory. Yet, when Christina Hoff Sommers of the American Enterprise Institute spoke an event as a guest of the Oberlin College Republicans and Libertarians earlier this week, she experienced those very things.

Nick Mascari of the Ohio-based blog Third Base Politics posted a delicious compilation of progressive inanity. Signs saying, “Free speech does not mean hate speech” (yes, hate speech is and should be protected), “Dear CHS [Christina Hoff Sommers], please go home and take your internalized misogyny with you, and “go away, rape apologists” were plastered from the event. There was a sign that read, “Rape culture is real and you are a participant,” which was obviously misspelled, but corrected with black magic marker.

Here’s an op-ed promoting an alternate event to Sommers prior to her arrival in Oberlin’s student newspaper. And here’s a video of two students announcing to the audience their alternate event in a safe space that will be guarded against the admittance of "toxic, dangerous, and/or violent" individuals.  Oh, and they mocked those folks at the Sommers event (using air quotes) for having the inclination to hear the other side.

Mascari was present at the event, where the Q&A session went down as expected:

Not surprisingly, many in the audience were quite rude and frequently interrupted Sommers. Many students sat in the audience with duct tape over their mouths, inferring that Sommers’ mere presence was an attempt to silence them. Ironically, by labeling her a “rapist supporter” and interrupting her, they were actually striving to silence her.

For most in the audience, rational discussion of facts is not even welcome.

Example: Sommers discussed the myth of the wage gap and explained that, in general, women choose to follow career paths that pay less than men. More women choose to study arts and humanities, while men are more likely to study engineering and science. Since there is more of a need and demand in the job market for technological expertise, people (men AND women) who go into engineering will earn more than people (men AND women) who major in art history, for example.

When she suggested that women could earn more and close the wage gap by changing their majors to something like engineering, many in the audience jeered loudly and exclaimed “Don’t tell me what to do!!”.

Don’t give me facts. Just shut up. That’s how Sommers was responded to.

I politely asked her, “But weren’t the last three girls?”

She glared at me and said, “This is an event about FEMINISM!”

After her discussion with the male student was finished, the same student said to me, “It’s offensive that you said to me “Should she only call on pretty girls?””.

“That’s not what I said. I asked weren’t the last three questions from girls? You misunderstood, miss.”

She continued to accuse me. I didn’t bother to inform her that I was recording the speech and had our words on tape. It wouldn’t have mattered.

Overall, it was a saddening experience that is all too common these days. Too often, we see a refusal to engage in a mutually beneficial debate of facts and solutions. If someone’s opinion differs, even slightly, they must be demonized, attacked and shouted down. They must be falsely accused of hate speech and supporting rape.

That attitude was certainly on display last night in Oberlin.

The sheer irony of the trigger warning, safe space monomania that pervaded this surly crowd was that Oberlin provided Sommers with a security escort to protect her from safe spacers; the very people who thought she was creating an unsafe environment (via Campus Reform):

Oberlin activists had "safe space" for those triggered by my talk.Oberlin admin. provided police security to protect me from safe spacers.

“It was such a strange experience,” Sommers told Campus Reform. “The students were so carried away with the idea that I was a threat to their safety—the Oberlin officials became alarmed—about my wellbeing. They arranged for security guards to escort me to and from the lecture to protect me from the safe spacers.”

“I doubt my appeals to reason and rules of evidence made much of an impression,” Sommers told Campus Reform. “I hate to say it, but some of those students need the services of a professional deprogrammer. What I saw was very cult-like.”

But it’s not only the feminists at the Buckeye State’s Oberlin that have accused Sommers of being a “rape denialist” and “misogynistic.” Sommers was met with the same lot of accusations during a talk last week at Georgetown University in Washington, D.C.

The same “safe space because this conservative speaker has me shaking in my little boots” mindset was also exhibited at the University of North Carolina this month as well, where David Horowitz was a guest of the UNC College Republicans:

After David Horowitz’s controversial visit to campus, many students took to Twitter to share their experiences feeling unsafe on campus, using the hashtag #NotSafeUNC.

Horowitz was invited by the UNC College Republicans and said in his speech that student organizations like the Muslim Students’ Association and Students for Justice in Palestine are connected to terrorist organizations.

Nicole Fauster, a senior who helped start the hashtag movement on Wednesday emphasized that this movement was created for students of any marginalized identity.

“It came out of a desire to create a platform for students to be able to explain and share their own situations and experiences and incidents that have happened to them on campus that have made feel unsafe,” she said.

Oh, and the editorial board of the Daily Tar Heel had a problem with Mitt Romney coming on campus to discuss President Obama’s foreign policy:

Romney, while likely briefed extensively about national security issues during his campaign for president, did not match that preparation with a nuanced discussion of national security policy, instead employing charged partisan rhetoric.

Universities, and by extension, student groups, have a responsibility to promote serious discussions about controversial issues. This responsibility is inextricably linked to universities’ statuses as safe havens for free speech.

UNC’s College Republicans and Duke should not lend the pageantry and platforms they did to speakers such as Horowitz and Romney if they will only use their platform to advance ideological agendas with little grounding in academic discussions of these critical issues.

Horowitz’s reputation for anti-intellectualism and hate speech precedes him, and he should not have been invited to UNC’s campus at all.

This is not an attack on freedom of speech. Horowitz had every right to speak on campus.

2+2 = 5; I got it. Liberals support free speech - just their version of it. That’s not the standard, nor is it a serious position. During my senior year at Dickinson College, Bill Ayers, co-founder of the radical left wing Weather Underground, was invited to speak–and he was met with some protesters–roughly a handful–but they were outside the auditorium. I attended the event, and I don’t recall any jeering or mockery of any kind. Keep in mind; Ayers wrote in his memoir that he participated in the bombings of NYPD headquarters, the Capitol building, and the Pentagon in the 1970s. He was eventually placed, along with his future wife Bernadine Dohrn, also of the Weather Underground, on the FBI’s most wanted list.

Sadly, the same courtesy isn’t extended to the right for obvious reasons, though if I could stomach a man whose only regret from his radical days is that he didn’t set enough bombs, then I’m sure a few feminists can sit through a discussion with Ms. Sommers without throwing a temper tantrum. Better yet, if you’re too afraid that a speaker would challenge your views on an issue, how about not going at all. It’s a horrible reason, but hey; this is America. There’s always something better to do in college than going out of your way to be abjectly rude and intolerant of someone with–shocker–a different point of view.

As for someone’s presence creating an unsafe environment, it never ceases to amaze me that this is real life.