Millennials Aren't As Liberal Once They Start Making Money 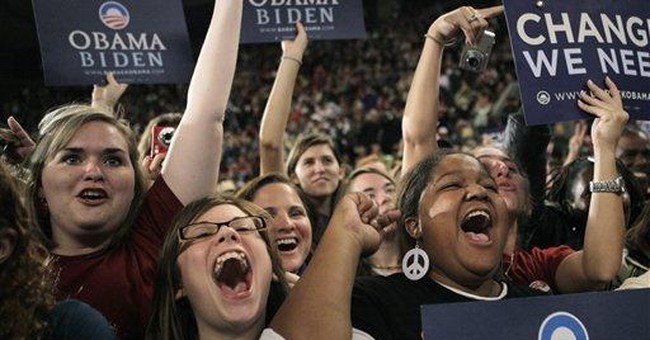 There may be a glimmer of hope for the Millennial Generation–my generation– when it comes to attitudes about government and the welfare state. In 2008, young Americans got drunk on Barack Obama. I mean, insanely drunk over Mr. Hope and Change, who bamboozled them not once, but twice. So, it should come as no surprise that after Obamacare’s disastrous rollout and the president’s ineffectiveness as a leader that  a majority of young Americans would support recalling him from office.

Ouch! But, so what if they agree to this? They're still hopelessly liberal on everything, right? Emily Ekins at Reason says not so much, especially once millennials become employed and, you know, start making money:

Millennials also become more fiscally conservative as they age, make more money, and learn they will become responsible for paying for things. In fact majorities begin to oppose income redistribution and increased spending on financial assistance to the poor, and support for government guarantees drops once millennials start making between $40K-60K a year. Moreover, as they roll off their parents' health insurance policies and begin paying for their own, they no longer are willing to pay more for insurance even "if it helped provide health insurance coverage for the uninsured," flipping from 57 percent in support to 59 percent opposed.

When it comes to Social Security, 71 percent of millennials support creating private accounts:

Similarly, Pew found 67 percent of all Americans also favor allowing younger workers invest in private accounts. However, if allowing younger workers to opt out of Social Security meant reduced benefits to seniors, only 38 percent of all Americans would favor while 55 would oppose, according to Reason-Rupe. Millennials’ willingness to cut entitlements simply doesn’t comport with strong economic liberalism.

As for health care, 54 percent of millennials believe that government should ensure access, but Ekins noted “GenX was also more supportive when they were in their 20s and have since changed.”

You can read the rest of Reason’s report on millennials here.

Although, while millennials might go the way of the generations before them, they’re largely “unclaimed.” While Republicans’ espousing of social conservatism might turn them off, the GOP’s advocacy for free markets and economic independence might be a magnet. Yet, they’re unsure if such a system is the best for social mobility, according to the report. That’s an area conservatives can surely win, but only if we make the argument. Demography isn’t destiny–and it seems the notion of young Americans being lost to liberalism is a bit premature.

After all, the majority of 18-year-olds voted for Mitt Romney in the 2012 presidential election.

I double-checked this and found a Washington Post article from March 10 that touched upon this, saying Democrats have a young people problem as well:

Among self-reported voters who were 18 years old in 2012, Mitt Romney, not Obama, won the majority: 57 percent. Romney also won 59 percent among 19-year-olds, and 54 percent among 20-year-olds. These youngest voters of 2012 had entered the electorate in 2010-2012, when Obama’s popularity was much lower than the high point of his inauguration.

In other words, they saw the Obama agenda in action.

Republicans have an inroad; let's see if they take advantage of it.