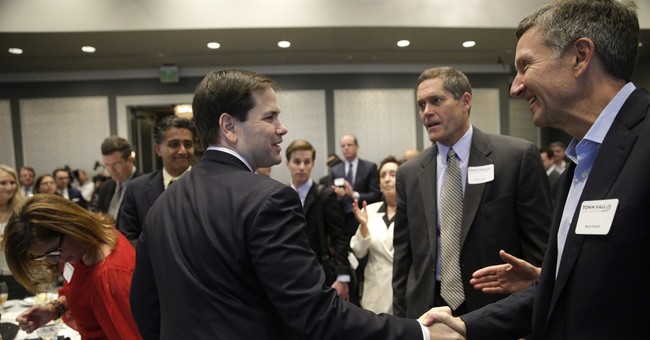 The poll, conducted May 2-6 by Washington-based Purple Insights, shows Bush and Rubio as Clinton's closest competitors in potential head-to-head contests. Both trail her by 2 percentage points. Paul is next, 3 percentage points behind her, followed by Walker, who trails Clinton by 6 points.

Part of Paul's strength is his ability to attract independent voters, a key group especially in New Hampshire, where they can vote in partisan primaries. He's supported by 18 percent of independents who said they were likely to vote in the Republican primary, easily the most of anyone in the field. That means he's going to want to see the state's Democratic primary remain a lopsided affair, prompting independents to stick with the action on the Republican side and continue to support him.

Bush is relatively weak among independents. While drawing support from 15 percent of Republicans, he has the backing of just 6 percent of independents. That's a potential problem for Bush, especially if he runs poorly in the Iowa caucuses set for the week before New Hampshire's primary. A Quinnipiac University poll released last week showed Bush in 7th place in Iowa, so he might need a top finish in New Hampshire to rebound.

Bloomberg noted that Rubio’s support has surged since his 2016 announcement on April 13, while Bush’s support has dropped five points; he’s expected to formally announce in June.  Nevertheless, it will all come down to money in the early voting states.  GOP strategists say the top-tier candidates will have to raise at least $75 million to get through the first three primary states, and it wouldn't shock me if the top three of four candidates we have in this poll  are the ones who can tread water and survive.  Still, the Tea Party, moderate, conservatarian, and libertarian wings of the party are still going to have a serious candidate representing them.

The base of the poll sample was 500, with 400 Republican and Democratic primary voters for the oversample.