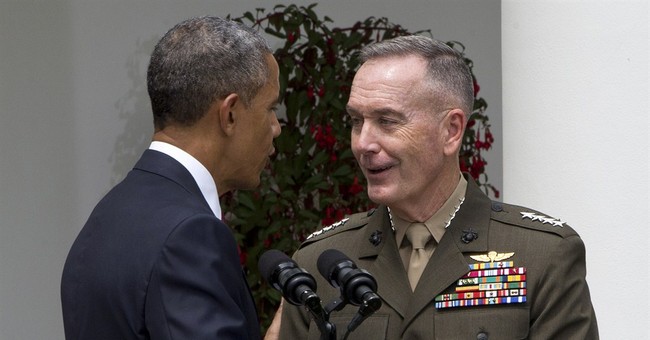 Yesterday, President Obama nominated Gen. Joseph Dunford, the current Commandant of the Marine Corps, to become the 19th Chairman of the Joint Chiefs of Staff, replacing outgoing Chairman Gen. Martin Dempsey, who is expected to retire once his term ends (via NYT):

Gen. Joseph F. Dunford Jr. took the same punishing combat fitness test the lowest-ranking Marine must pass, and dressed in his formal uniform in Afghanistan to meet with that nation’s president.

The man President Obama nominated on Tuesday to be the next leader of the Joint Chiefs of Staff is known for his ability to maneuver between the disparate roles of battlefield commander and military strategist with a deft political touch.

General Dunford, 59, served as the top American commander in Afghanistan before taking over as commandant of the Marine Corps last fall. If confirmed by the Senate, where his nomination won praise on Tuesday from lawmakers in both parties, he would be only the second Marine to hold the highest leadership post in the armed forces.

Mr. Obama chose General Dunford as his top military adviser to help him juggle a range of global challenges, including winding down one grinding war in Afghanistan and figuring out how to win another conflict against the Islamic State in Iraq and Syria.

“I know Joe, I trust him,” Mr. Obama said on Tuesday at a formal ceremony in the Rose Garden of the White House, where he announced General Dunford’s nomination. “He’s already proven his ability to give me his unvarnished military advice based on his experience on the ground.”

When General Dunford was commanding American and NATO forces in Afghanistan, he impressed Mr. Obama during hundreds of hours of secure video conferences, and an easy rapport developed between the two men — the president seated in the White House Situation Room in Washington and the commander in Kabul. Mr. Obama appreciated the general’s quiet, matter-of-fact manner while he handled numerous crises, administration and defense officials said.

If confirmed, Dunford will continue to counter the growing threats facing the United States, along with the pressing problems facing the state of our military, which were detailed by the Heritage Foundation (via the National Interest):

The new index assesses America’s hard power, which is measured in terms of “capability or modernity, capacity for operations, and readiness,” against threats to vital U.S. interests. It also looks at “the ease or difficulty of operating in key regions based on existing alliances, regional political stability, the presence of U.S. military forces, and the condition of key infrastructure.”

The conclusion of the report is not exactly comforting: namely, America only possesses “marginal” military strength to defend its vital interests in the current threat environment. “Overall, the Index concludes that the current U.S. military force is adequate to meeting the demands of a single major regional conflict while also attending to various presence and engagement activities,” the report states. “But it would be very hard-pressed to do more and certainly would be ill-equipped to handle two, near-simultaneous major regional contingencies,” as successive administrations of both political parties have used as their benchmark for military strength.

The Index also grades each of the services, as well as the Marines and America’s nuclear forces on a five-point scale based on their capacity, capability and readiness. Only the Air Force receives an above-average grade; it is assessed as “strong,” the second-highest ranking on the scale.

There’s also the ongoing problem regarding veterans’ state of mental health and suicide prevention. Regardless, it looks like Gen. Dunford’s confirmation will be a smooth one. He will be the second officer from the Marine Corp, after Gen. Peter Pace, to hold the position.

Gen. Dunford is expected to chart the same course regarding the use of American military power as his soon-to-be predecessor, Gen. Dempsey; namely avoiding rushing into battle (via WSJ):

Like the current chairman, Gen. Dunford has been unconvinced of the utility of many long-term deployments of American troops. A former top international commander in Afghanistan, he arrived there skeptical of the counterinsurgency mission taken on by his predecessors.

He sped up the transition to having American forces focus nearly exclusively on training the Afghan military, a critical part of the U.S. exit strategy. Gen. Dunford, associates say, has long been wary of having U.S. forces carry out missions that could be done by local forces.

All this squares with the approach taken by Gen. Dempsey in his nearly four years as the nation’s most senior uniformed officer—the top military adviser to both the president and the defense secretary. Like most senior generals active today, Gen. Dempsey was shaped by the long Iraq war.

So when the U.S. military returned to Iraq in 2014 to combat Islamic State, he pushed for tight restrictions on how American forces could operate, to make Iraqis do more themselves. These are restrictions that defense officials expect Gen. Dunford to continue.

Nevertheless, even as Congressional Republicans and the White House draw lines in the sand over Gitmo in the defense budget, Dempsey reiterated the threats facing the country and the world community.