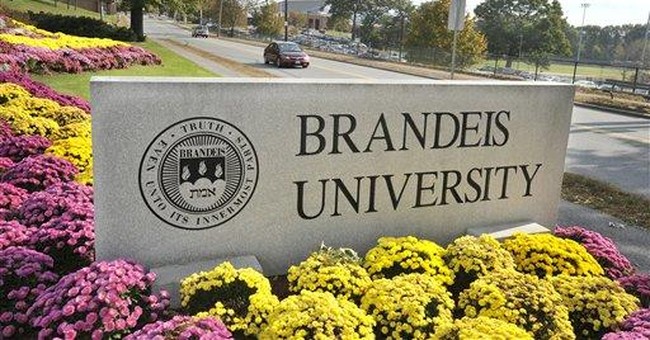 Okay. What is this? An Asian-American group at Brandeis University produced an exhibit addressing racial microaggressions, only to end up apologizing for microaggressing some members of the student body. It’s irony at its finest (via Kat Timpf):

The Asian-American Students Association at Brandeis University put up an exhibit to raise awareness about “microaggressions” on campus — only to end up apologizing after some students complained that they had been had “triggered” by it. The display, which had appeared on the steps of the school’s Rabb Graduate Center, featured white pieces of paper with examples of so-called “microaggressions” that Asian people must endure, as reported by Legal Insurrection.

The purpose of the exhibit, according to a BUAASA Facebook post, was to “bring attention to microaggressions that are frequently heard in and out of the Brandeis community” and demonstrate that when “seemingly innocuous comments” “build upon each other . . . the burden can be overwhelming and frustrating.” “This is what it feels like to hear microaggressions constantly used against you,” it continues. “These papers are invasive of a space that you often inhabit and must pass through; similar to how these remarks invade our communities and the space we share as a whole: Brandeis. The experience is often alarming, alienating, and ultimately harmful. To us, it is unavoidable.”

In any case, the plan backfired when some students apparently complained that BUAASA’s attempt at making campus a more safe space had made them feel unsafe. “We would like to acknowledge and apologize to the Asian students on campus who were triggered or hurt by the content of the microaggressions in our installation,” BUAASA’s president wrote in an e-mail to the entire student body today, according to Legal Insurrection. “We understand and empathize with the effect that this installation could have without the context of the explanation provided on our Tumblr,” the group wrote. The e-mail also announced that the microaggressions display had been taken down and replaced with an explanation that would remain there at least through the end of final exams.

First, some of these “microaggressions” are just contrived.

“I totally have an Asian fetish, wow you’re so Americanized! You have so many white friends, and go back to where you came from” were just some of the postings on campus. The latter one is just ridiculous. Even Martin Scorsese’s Gangs Of New York features more realistic anti-immigrant, racist, and in the case of Bill Cutting, anti-Catholic dialogue than these flyers.

When I was seven, I was called a “Chinese noodle” by a group of kids. Guess what; I got over it. For some, it appears that playing (frivolously) with semantics and–at times–curtailing free speech are the only ways to make them feel safe or something. It does provide some good entertainment though.