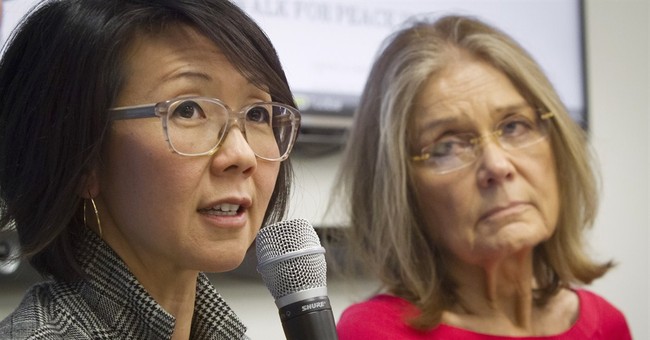 Earlier this month, North Korea gave Gloria Steinem the green light to accomplish absolutely nothing regarding ending the war on the Korean peninsula. Steinem­–and 29 other women–will maneuver their way through the world’s most fortified border in the world, minefields and all, in the hope that their journey will begin discussions on reunification. Yeah, wake me when that happens (via the Hill):

“I wish I knew how the ultimate decision was made, but at this point I’m just relieved that at least we have Pyongyang’s cooperation and support,” co-organizer Christine Ahn told AP in an email.

Ahn said the walk aims at encouraging reunification of the Korean Peninsula. The landmass has remained divided since the Korean War ended in 1953.

Women Cross DMZ is hoping that Steinem and 29 other women will successfully traverse the world’s most fortified border. Should they pass over the 38th parallel, they will navigate around deadly minefields and hundreds of thousands of tense soldiers.

South Korea is still weighing whether or not to assist the group’s efforts. A similar request to the United Nation’s presence on the Korean Peninsula is also pending.

The first, Mairead Maguire, won her award in 1976 for founding the Northern Ireland peace movement.

The second, Leymah Gbowee, received her prize in 2011 for working to end Liberia’s civil strife.

Reunification is a tricky business. First, it could be incredibly expensive, and South Korea’s more fiscally conservative younger population doesn’t seem too enthused with this massive rebuilding project. Support for reunification has declined over the years. And information critical to any rebuilding/reunification effort remains scarce. North Korea is one of the largest prisons in the world.

Yet, Lizzie Crocker of the Daily Beast wondered if this cadre of women were just propaganda fodder for North Korea, noting that their goals seem to avoid addressing the brutal human rights abuses that have been reported in the North, especially its treatment of women:

[T]hey are calling on the UN to broker a peace treaty between the North and South, and asking the U.S. to lift sanctions against the North.

The group plans to hold symposiums in Pyongyang and Seoul where they will “listen to Korean women and share our experiences and ideas of mobilizing women to bring an end to violent conflict,” according to its website [Women Cross DMZ].

One might expect that Steinem, one of the most vocal feminist advocates in the ‘70s, would call out the regime’s brutal treatment of women.

But so far, her statements about the planned peace walk have been decidedly anodyne. “It’s hard to imagine any more physical symbol of the insanity of dividing human beings,” she said at a press conference last month announcing the walk.

She did, however, dismiss charges that she is “pro-North Korea” in an interview with CNN earlier this week. “Basically that is a Cold War mentality, and that kind of framework is what has enabled Korea to remain divided. I am pro-peace. I am pro-engagement. I am pro-dialogue. I am pro-human rights,” she said.

Yet Ahn has long been uncritical of North Korea, a country that has some committed some of the worst human rights abuses on record.

She continued: “But is Kim Jong Il really starving his people or his the fact that the U.S. still technically at war with North Korea driving the persistence of famine?” War and [U.S.] sanctions between the two countries are “the real culprits driving hunger in North Korea,” she wrote.

[T]he UN estimates that the Kim regime squandered billions of dollars during the height of the great famine in the ‘90s, Ahn has never acknowledged the regime’s responsibility.

Yeah, there’s nothing really much to say about this other than it’s a colossal waste of time.

Honorable Mention*: Code Pink's Medea Benjamin will be there.