The Re-Education of Hillary Clinton? – Not Really 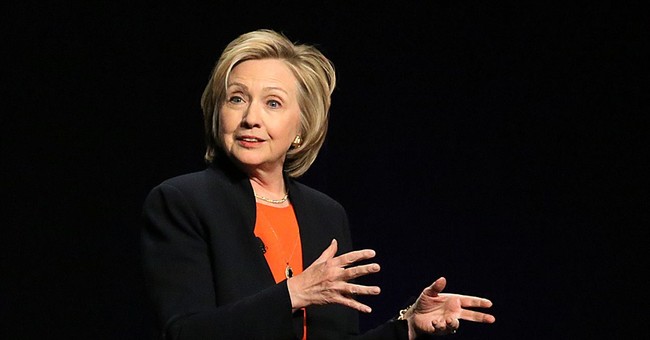 UPDATE: Maybe it's really not a comeback at all.

Progressive Change Campaign Committee has launched ReadyForBoldness.com, which aims to push Hillary towards the left on policy issues such as Social Security, campaign finance reform, and reining in Wall Street, according to The New York Times. Over 200 Iowa and New Hampshire Democrats, including former Iowa Sen. Tom Harkin–a firebrand liberal–, have signed the site’s petition.

Democracy Alliance, a group of the left’s biggest donors, has recently signaled their plans for the future; they want to be the driving progressive force in the Democratic Party. As Politico noted, this group hasn’t had the best of relations with the Clintons. In 2006, Bill Clinton got into a spat with Guy Saperstein, a part owner of the Oakland A’s, over then-Sen. Clinton’s vote over the Iraq War; a vote for which the anti-war progressive wing of the party has yet to offer their forgiveness. Saperstein left the Alliance in 2008, but remains close with its members. Last year, Saperstein gave $1 million to a PAC spearheading a Draft Warren movement. The Alliance has invited Hillary to speak at one of their closed-press gatherings in San Francisco next month, but she declined. It’s around the time she’s expected to announce her 2016 bid for president (via Politico):

An influential coalition of the biggest liberal donors is quietly distancing itself from the national Democratic Party and planning to push its leaders — including Hillary Clinton — to the left.

It aims to steer more than $30 million a year toward groups committed to fighting income inequality, climate change and the influence of political money. A particular focus is on groups fighting those issues at the state level, reflecting a sense among donors that national political gridlock limits chances for progress on their issues, regardless of the specific candidates.

“The Democracy Alliance donors, as I read them, while they are almost all Democrats and they are electorally active, want to be a progressive force independent from the Democratic Party,” said the group’s president, Gara LaMarche. “That’s not about Hillary Clinton as such, or about Barack Obama as such. It’s about standing for certain core concerns on the economy and climate and pushing that in the states.”

LaMarche wouldn’t comment on plan specifics, expected to be completed in early April, except to say that it reflects broad “alignment” among progressive donors on “key economic issues and climate change.”

But other sources with knowledge of the plan characterize it as more aligned with Sen. Elizabeth Warren of Massachusetts, the dream presidential candidate for many Democracy Alliance members, than with Clinton, the leading Democratic presidential candidate. And for some liberals, it foreshadows an emerging rift that could hamper efforts up and down the ballot in 2016, and possibly lay the groundwork for a liberal version of the tea party, resulting in years of factionalism.

Clinton might have been an uncomfortable fit at the San Francisco meeting because it would highlight issues on which her centrist sensibilities clash with the Alliance’s more liberal views.

For instance, according to a draft agenda obtained by POLITICO, the meeting will feature sessions on reducing the influence of big money politics and reforming the criminal justice system, including ending the death penalty. Clinton, an unparalleled fundraiser, hasn’t led the charge on campaign finance reforms and supports capital punishment — unlike potential 2016 Democratic presidential rival Martin O’Malley.

Wait, they’re trying to start a liberal tea party? Wasn’t that Occupy Wall Street? Yet, while it’s been reported that Warren’s biggest donors won’t turn their backs on Hillary, it seems that Warren has a potentially large reserve of campaign cash she can tap into, along with her reported Hollywood faction that would support her if she runs. Then again, it could be just a pipe dream.

“Hillary did not fare well in the Democracy Alliance eight years ago, and I don’t think there is going to be much more support for her this time, other than people thinking that she is the horse we’ve got, so we better not criticize her because it could weaken her,” Saperstein told Politico.

It seems for now; both groups are more focused on influencing and shaping Hillary’s 2016 platform than actively searching for candidates to challenger her in the primaries. Though, I’m sure a lot of people in the progressive wing want someone to challenge the Clintons. Then again, a Republican victory in 2016 would put much of what Obama has accomplished in jeopardy, which is why Team Obama–though aghast at the fact she deleted over 30,000 emails willy-nilly because she deemed them private–want her to win next year. So, that logic could be factored into this “we don’t really like her, but oh well” attitude the left has toward Hillary.

Regardless, Hillary is projected to raise over $1 billion for her campaign, but is only focused on raising for the primaries at present:

Clinton's campaign-in-waiting is developing a stable of fundraisers and finance aides for a race likely to exceed the more than $1 billion President Barack Obama raised for his 2012 re-election. If Clinton announces in April, as expected, her campaign would be required to release its first fundraising report in July.

The Democratic National Committee plans to set up joint fundraising committees with any primary campaign that wishes to do so, as it did in 2008 with Clinton and Obama. The joint events will allow donors to give money to both the campaign and the DNC, one of the Democratic officials said.

The ex-secretary of state's finance team will be led by Dennis Cheng, a former top fundraiser for the Clinton Foundation and Hillary Clinton's 2008 presidential campaign. Under Cheng, the planned finance operation is making changes from its previous incarnation.

The Democrats familiar with the planning said Clinton's campaign is expected to focus on raising checks of $2,700-per-person for the primary and is not expected to create a single finance chair or national co-chairs.

Instead, the campaign is likely to have a merit-based national finance committee of top donors that will be similar to the arrangement under Obama. The campaign also plans an early focus on online fundraising, the officials said.

So, for those hoping that Hillary might veer to the left, it appears she doesn’t need to with regards to raising campaign cash. There doesn’t seem to be any indication that there will be a reeducation of Hillary Clinton. Yet, the notion that she’s running from her true self (a progressive liberal vs. a centrist Democrat) remains a point with Republicans, as Mike Murphy noted in 2000 on Meet The Press; it’s also a reason why he doesn’t respect her since she opts to be a centrist Democrat when he feels she's not. He said Clinton veered into that "doctrinaire liberal" territory a little bit when she said there's a "vast right wing conspiracy" against then-President Clinton in 1998.

It's going to be the same ole' Hillary, folks. For conservatives, we already knew this, but for progressives; hey, it's the only person you've got.

As for Clinton, some are reporting she's undergoing what her family has done before in American politics: mounting a comeback.  Though we shouldn't take much stock in polls this early in the game, Clinton is assembling a campaign team that's highly respected, has experience, and has good relations with the press. And while I thought the email scandal might have her limping out of the gate, that seems to have dissipated in the media. Then again, the emails can make their way back into the forefront once the 2016 campaign season get serious.