Confirmed: 'No Evidence' To Back Up UVA Gang Rape Claims 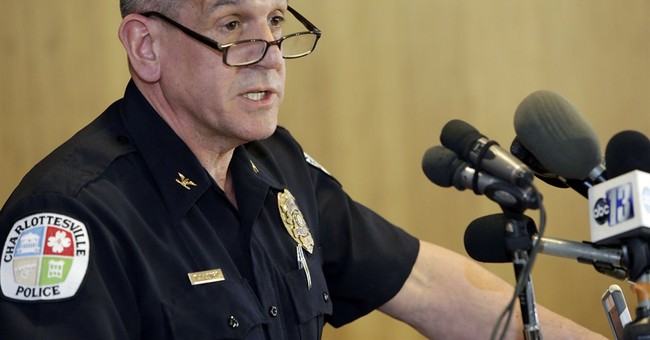 Last year, the Rolling Stone published a horrifying piece about a vicious gang rape in the Phi Kappa Psi fraternity house at the University of Virginia. It sparked a national dialogue about rape on college campuses. Yet, within days of its publication, the journalistic integrity of the story was destroyed; the magazine issued multiple apologies, and–incredulously–the writer who penned this sensational article was tasked with re-reporting her own discredited story. Now, the authorities have suspended their investigation into the matter, citing that the evidence doesn’t back up her account. “Jackie,” the pseudonym for the young woman at the center of this controversy, refused to cooperate with the investigation. Yesterday, Charlottesville Police Chief Tim Longo held a presser announcing the latest in this case (via ABC News):

Police in Charlottesville, Virginia, unveiled the results today of an investigation into an alleged rape at the University of Virginia and noted that authorities found "no evidence" that allegations detailed in a controversial Rolling Stone article in November 2014 were true.

Police said they were not able to conclude that an incident occurred at the Phi Kappa Psi house on Sept. 28, 2012.

"We have no evidence that supports those assertions" in the article, Charlottesville Police Chief Tim Longo said.

The woman, identified as "Jackie," alleged in the article that she was gang-raped by seven men at a UVA Phi Psi fraternity party in September 2012.

Police said today "we can't say something didn't happen" to her, but they have "no substantive basis" to conclude anything happened at Phi Psi.

During the investigation, police talked to about 70 people, including Jackie's friends and fraternity members, Longo said. Investigators talked to nine of the 11 Phi Psi members living in the house at the time, and none of them knew Jackie or had any knowledge of the alleged assault, Longo said.

Police also found no evidence that a party or event took place at Phi Psi on Sept. 28, 2012, noting that a time-stamped photo from that night shows the house practically empty, Longo said.

In January, a police investigation cleared Phi Psi of any involvement in the alleged rape and the fraternity was reinstated on campus.

Longo noted today that the case is not closed, but is suspended until they are able to gather more information.

It is a "disservice" to Jackie and the university, Longo said, to close the case without allowing the opportunity for additional information to come forward.

"There's no statute of limitations of this particular type of crime," Longo said, noting that Jackie declined to be questioned by police investigators.

The Phi Psi fraternity has been reinstated, but is now exploring legal options against Rolling Stone magazine. At the same time, while the story about the gang rape in the Rolling Stone piece has been thoroughly debunked, the original story Jackie told her friends is plausible, but we’ll never know since the music publication decided to botch the facts.

“Randall,” “Andy,” and “Cindy"–three of Jackie’s friends who saw her the night of the alleged attack–said her original story revolved around being forced to perform oral sex on five men. They also said it was Jackie who did not want to report this incident to the police.

The first signs of trouble with this piece came when it was discovered that Rolling Stone didn’t contact the alleged attackers. Sabrina Rubin Erdely, the author of the debunked piece, interviewed UVA student Alex Pinkleton who said she felt Erdely had an agenda with this article. Moreover, she didn’t even contact Jackie’s three friends who saw her on the night of her alleged attack, even though she wrote “Randall” refused to be interviewed because he was loyal to his fraternity.

New York Magazine has a detailed history of the discrepancies/errors that were made with this story. It’s exhaustive.

So, here’s a quick list of the problems with this story.

Jackie has now given her friends two different names for the man she was with that night. Neither of them was in fact with her, ever dated her, or even knew her all that well. She appears to have invented a suitor, complete with fake text messages and a fake photo, which suggests a capacity for somewhat elaborate deception. Jackie, though, has not recanted her story. Her attorney would not answer questions for the Post's story on Wednesday and has told reporters to stop contacting Jackie.

Here's the most disturbing journalistic detail to emerge from the Post's reporting: In the Rolling Stone story, Erdely says that she contacted Randall, but he declined to be interviewed, “citing his loyalty to his own frat.” Randall told the Post he was never contacted by Erdely and would have been happy to be interviewed.

That could mean one of two things: Jackie could have given Erdely fake contact information for Randall and then posed as Randall herself, sending the reporter that email in which he supposedly declined to participate in the story. Erdely also could have lied about trying to contact Randall. Rolling Stone might have hinted at this possibility in its “Note to Our Readers” when it referred to a “friend of Jackie’s (who we were told would not speak to Rolling Stone)" but later spoke to the Washington Post. That would take Erdely a big step beyond just being gullible and failing to check her facts, moving this piece in the direction of active wrongdoing.