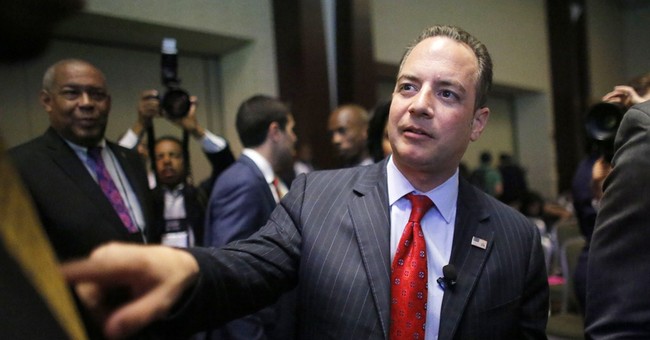 Yesterday, RNC Chairman Reince Priebus held a 20-minute sit down to answer questions from media members at the Conservative Political Action Conference. In a suite in the Gaylord National Resort and Convention Center, our own Guy Benson asked the chairman about the revelation that millions of dollars were given to the Clinton Foundation–an organization that’s raised $2 billion since its creation in 2001– by foreign governments while she was serving as President Obama’s Secretary of State and the passage of right to work in his home state of Wisconsin.

On February 26, the Wisconsin State Senate passed a right to work bill by a slim 17-15 vote. The law would prohibit forced dues to unions by private sector employees working under labor union contracts, according to Reuters. It now heads to the Republican-held State Assembly for final passage.

On both of those issues, the chairman said:

I don’t know how Hillary Clinton is going to take a 3 ‘o’clock call– 3am call from Libya, or Yemen, or Algeria, or Saudi Arabia when she was willing to have her foundation take potentially millions of dollars from those governments… Which country gave money? Who authorized the money to go there? Who did the negotiating because people just don’t–as you know and I know from raising money every day for the RNC– most of the time people just don’t wake up in the morning, saying I’m going to write a check for $25,000 without talking to somebody. Somebody solicited a donation, somebody made that donation happen, somebody collected the check, or gave wire transfer information to these other countries to make all of this happen.

Do you know what disqualifies someone from being president? It’s not having 50 articles about whether Barack Obama is a patriot or not, or whether he’s a Christian; the issue is how is it possible that the frontrunner of the Democrat Party is going to be President of the United States when she’s taking money while she’s representing the United States as Secretary of State.

Now, as far as right to work, it’s going to create jobs in Wisconsin. Look you can’t run an economy in Wisconsin when you’ve got Indiana, Michigan, and Iowa, as right to work states, taking their jobs. So, this is about competition and being competitive; it’s also about freedom.

It was recently reported that one of those foreign donations violated an ethics agreement (via WaPo):

The Clinton Foundation accepted millions of dollars from seven foreign governments during Hillary Rodham Clinton’s tenure as secretary of state, including one donation that violated its ethics agreement with the Obama administration, foundation officials disclosed Wednesday.

Most of the contributions were possible because of exceptions written into the foundation’s 2008 agreement, which included limits on foreign-government donations.

The agreement, reached before Clinton’s nomination amid concerns that countries could use foundation donations to gain favor with a Clinton-led State Department, allowed governments that had previously donated money to continue making contributions at similar levels.

The new disclosures, provided in response to questions from The Washington Post, make clear that the 2008 agreement did not prohibit foreign countries with interests before the U.S. government from giving money to the charity closely linked to the secretary of state.

In one instance, foundation officials acknowledged they should have sought approval in 2010 from the State Department ethics office, as required by the agreement for new government donors, before accepting a $500,000 donation from the Algerian government.

The money was given to assist with earthquake relief in Haiti, the foundation said. At the time, Algeria, which has sought a closer relationship with Washington, was spending heavily to lobby the State Department on human rights issues.

That year, Algeria spent $422,097 lobbying U.S. government officials on human rights issues and U.S.-Algerian relations, according to filings made under the Foreign Agents Registration Act. Data tracked by the Sunlight Foundation shows that while the Algerian government’s overall spending on lobbying in the United States remained steady, there was an increase in 2010 in State Department meetings held with lobbyists representing the country — with 12 visits to department officials that year, including some visits with top political appointees. In the years before and after, only a handful of State Department visits were recorded by Algeria lobbyists.

A 2010 State Department report on human rights in Algeria noted that “principal human rights problems included restrictions on freedom of assembly and association” and cited reports of arbitrary killings, widespread corruption and a lack of transparency. Additionally, the report, issued in early 2011, discussed restrictions on labor and women’s rights.

A State Department spokesman referred questions about the ethics-office reviews to the charity. Nick Merrill, a Clinton spokesman, declined to comment.