Attendees Pack The Ballroom For Gov. Walker’s Address At CPAC 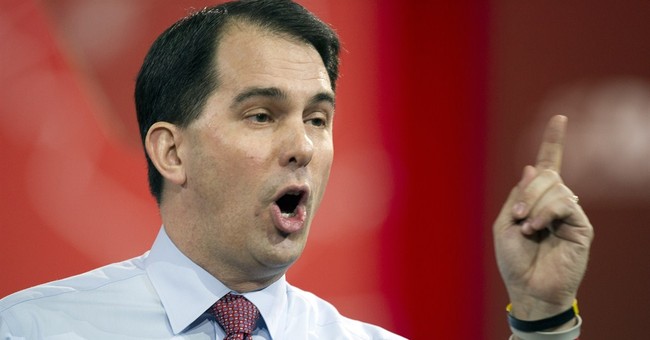 Wisconsin Gov. Scott Walker, a possible 2016 presidential candidate, addressed a packed room at this year’s Conservative Political Action Conference. He entered the Potomac Ballroom at the Gaylord National Resort and Convention relaxed, no jacket on, and delivered a red meat address to the soldiers of the Republican base.

The governor was adamant that freedom and prosperity isn’t conjured from the machinations of big government, but from the people who control and decide their own destinies. Walker stressed that success should be measured by how many people are no longer dependent on the government

He also slammed Obama for drawing lines in the sand and not taking action, for his failure in Yemen, and his inability to recognize the threat of ISIS. The governor also criticized the administration for their lack of respect for Israeli Prime Minister Benjamin Netanyahu.

“We need a leader who will stand with Israel,” he told the crowd.

Walker asserted that America should stand for what’s right and wrong. That declaration segued into an anecdote about how he and his prayed before entering the Wisconsin gubernatorial race in 2010. They decided to jump into the political endeavor that would make him a national star amongst the right for a simple reason: he and his wife, Tonette, were worried about their sons’ future.

“As parents, that was unacceptable,” he said.

The governor mentioned how he became public enemy number one amongst Washington’s entrenched interests and that of the political left. Nevertheless, he emerged victorious, winning the 2010 gubernatorial, the 2012 recall attempt, and his 2014 re-election bid. He proudly said, “We showed we could fight and win for the hard-working taxpayers.”

On other issues, like education, Walker cited that Wisconsin’s graduation rates are up, as are their students’ reading scores. With the budget, Walker said, “after four years, we’ve reduced the burden on hard-working taxpayers by $2 billion.”

On the life issues, Walker prided in his effort to push through pro-life legislation and defund Planned Parenthood. Regarding the Second Amendment, he said, “we enacted concealed carry and passed Castle Doctrine.”

Oh, and to combat voter fraud, Walker mentioned, “You need a photo ID to vote in the state of Wisconsin.”

He also mentioned that the Republican-controlled legislature is poised to make Wisconsin the 25th right to work state in the country.

In closing, he said that we don’t go back in time to rejuvenate the American spirit. We cannot relive or replicate the conditions that spurred the birth of the ideals our society is built upon. That’s impossible. Instead, Walker said that we must use the principles of our Founding Fathers as a guide to find the way forward to a brighter, more prosperous future.

It was a "red meat" address, which the audience thoroughly enjoyed.

Walker was heckled during his speech, albeit for a quick second, before he, along with the rest of attendees, pretty much shut it down.