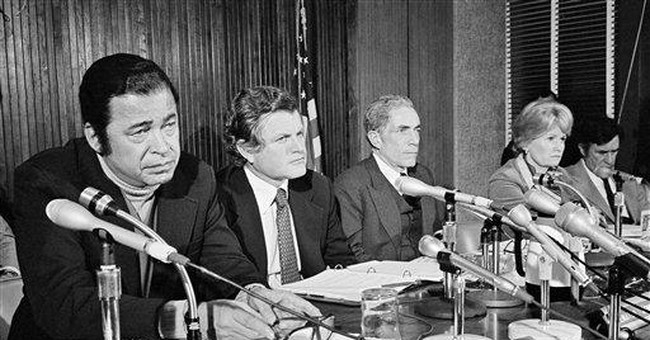 In 1966, Brooke became the first African American elected to the U.S. Senate since Reconstruction; a race he won by almost 500,000 votes in a state where blacks were less than three percent of registered voters.

RNC’s co-chair Sharon Day issued remarks at the luncheon about the late senator, and the extraordinary life he led. He was a graduate of Howard University and served in the military. He eventually earned the rank of second lieutenant after the Pearl Harbor attacks.

“After serving in Italy, he earned the rank of captain, the Bronze Star, and a Distinguished Service Award,” said Day.

“After attending Boston University Law School, he entered Massachusetts politics. After a successful appointment as chair of the Boston Finance Commission, he was elected state attorney general in 1962, becoming the first black attorney general of any state,” she added.

Day also noted that President Kennedy allegedly said that Brooke’s attorney general win was “the biggest news in the country,” despite his brother–Teddy–winning the Massachusetts Senate seat that same year. Then-Sen. Brooke also integrated the Senate barbershop by getting his first haircut there upon being elected.

At the same time, Brooke was a different kind of Republican, as the The New York Times  noted in their obituary of him:

A skilled coalition builder at a time when Congress was less ideologically divided than it is today, Mr. Brooke shunned labels, but he was seen as a centrist. His positions and votes were consistently more liberal than those of his increasingly conservative Republican colleagues.

He opposed the expansion of nuclear arsenals, pushed for improved relations with China and championed civil rights, the legalization of abortion and fair housing policies. He urged Republicans to match the Democrats in coming up with programs to aid cities and the poor.

He was a thorn in the side of his party’s leader, President Richard M. Nixon. He successfully led the fight against two Nixon Supreme Court nominees whose positions on civil rights were called into question. When Nixon became entangled in the Watergate scandal, Mr. Brooke called for the appointment of a special prosecutor. He was the first Republican senator to demand Nixon’s resignation.

Of course, the Times had to add a subtle dig that Republicans have become anti-poor.

It did mention Brooke was a vice presidential and Supreme Court prospect in his public life career, but refused to endorse–or even be photographed with–Barry Goldwater during the 1964 presidential election.  He was a man who marched to the beat of his own drum.

Brooke won re-election in 1972 in a landslide victory, clinching almost 64 percent of the vote. Yet, he lost to Rep. Paul Tsongas in 1978 after a messy divorce from his first wife garnered national attention. As CBS Boston reported, the divorce proceedings led to a Senate ethics investigation into his finances and a state welfare department investigation that some say cost him re-election. In 2000, Brooke reflected on this point in his life:

“It was just a divorce case. It was never about my work in the Senate. There was never a charge that I committed a crime, or even nearly committed a crime,” Brooke said. “I would certainly not be truthful if I didn’t say I was sorely hurt when the people of Massachusetts voted against me and didn’t look beyond the allegations and didn’t remember what I had tried to do for them.”

Brooke was the last Republican senator from the Bay State until Scott Brown’s win over Martha Coakley in 2010.

In his post-Senate career, Brooke became an advocate for male breast cancer awareness after being diagnosed in 2002. He beat it.

“You never know in life what you’re going to be called upon to do,” he said.

Two years later, then-President George W. Bush awarded him the Presidential Medal Of Freedom for his service in public life.