Did the DNC Just Compare Scalise to Hitler? 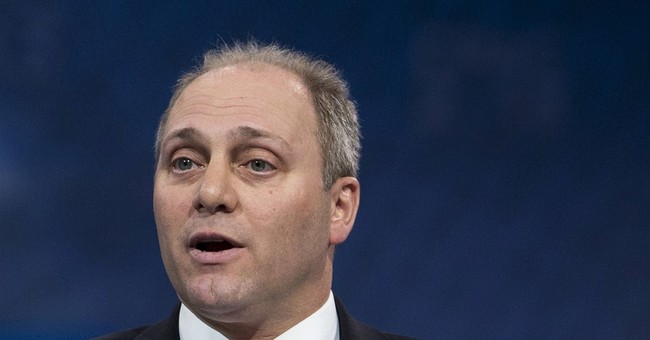 Just before the start of the 114th Congress, Rep. Steve Scalise was embroiled in controversy over whether he addressed a crowd of white nationalists back in 2002. Scalise was a Louisiana state representative at the time. Scalise admitted to addressing the conference and apologized, but it turned out he really didn’t address the conference at all. He spoke to a group of people from the surrounding community, who weren’t white nationalists, hours before the start of the actual gathering. While it may have been poor judgement to address a group of people in the same location as a white nationalist conference, it was a nothing-burger. But it still could come back to haunt the GOP this session. Though in a more irritating way, like the aggravation brought on by the inane “war on women” talking points.

Right now, Democrats are taking full advantage of this Scalise story by comparing him to Hitler. No, I’m not joking. This is what they emailed yesterday:

Scalise’s posture is eerily similar to this picture of Adolf Hitler.

As normal human beings, we should be shocked, horrified, and angered by this overt attempt at race baiting on behalf of the Democratic Party. Then, it hits you; this was from the Democratic Party. Of course they would pervert a non-story like this to construct a frivolous warning about National Socialism being promoted by congressional Republicans.

Even if the DNC isn't making a Hitler comparison, the infographic is factually wrong. Scalise didn't address white supremacists, he's not going to promote their racist, and absurd, agenda, and there's no "Neo-Nazi" cabal waiting in the wings, or in the Republican leadership, that's ready to set the U.S. Capitol on fire and assume power under the non-existent Enabling Act.