Scalisegate? Former Louisiana Governor Says ‘This Is A Non-Story’ 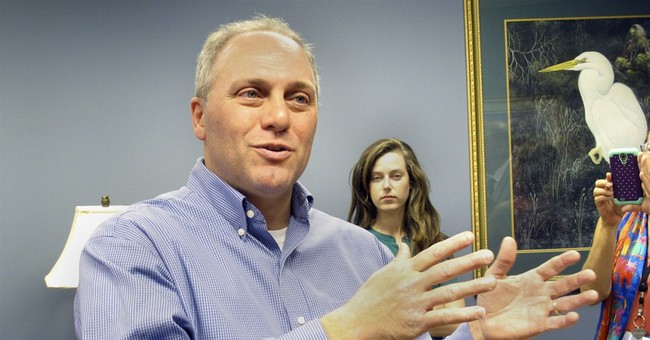 Editor's Note: With more details coming to light, it seems that Scalise didn't address a group of white nationalists in 2002. He addressed a crowd in a room at the same hotel where the white nationalist conference was being held. Nevertheless, it was probably not the wisest choice to accept an invitation to speak at this location from his neighbor Kenny Knight, who was David Duke's former campaign manager. Duke is a former grand wizard of the Ku Klux Klan.

Scalise also apologized for addressing the group, which was also a poor decision choice. Regardless, the post has been corrected to reflect these updates.

Democratic Louisiana Rep. Cedric Richmond, who said Rep. Steve Scalise does not have a “racist bone in his body,” isn’t the only person saying that about him. Scalise, the House Majority Whip, is coming under siege after it was revealed he addressed a crowd in the same hotel where a white nationalist conference was being held in 2002. He was a state representative at the time. Former Louisiana Governor Edwin Edwards, also a Democrat, said that the congressman isn’t a racist, and finds this whole debacle to be a “non-story” (via Bloomberg) [emphasis mine]:

The national notoriety of David Duke peaked 23 years ago, when he shocked the Louisiana Republican establishment and made it into Louisiana's gubernatorial runoff.

"I literally defeated the Republican sitting governor of that state," Duke crowed to the Huffington Post in an interview Monday. "I had a huge amount of Republican support."

Duke went on to lose the election in a 22-point landslide to scandalized former Governor Edwin Edwards. Twenty-three years and one jail sentence later, Edwards remains politically active—he just ran and lost a bid for Congress—and contemptuous of Duke. Still, he doesn't think Representative Steve Scalise should be tarred or forced to resign because he spoke at a 2002 meeting of a Duke-run "European American" organization.

"People who are in public life, public figures, get dragged into situations that be put on by the wrong people and might look bad," said Edwards in a short phone interview. "I know Scalise, and I think he’s far too right, far too conservative, but I don’t think he’s a racist. He doesn’t have a racist bone in his body. As far as I’m concerned this is a non-story."

Frankly, I was in prison in 2002, and that organization [Southern Poverty Law Center] doesn’t ring a bell with me," he said. "But I’m not going to second-guess Steve Scalise. He might have had another purpose in going. He might have wanted to change their minds. I’ve been to some very hostile meetings, and in some instances, I changed minds. I’ve been to meetings of the White Citizens Council, which I knew going in was a racists' group, but I wasn’t afraid to talk to them. Frankly, almost everything bad that could be said has been said about me, but nobody's called me a racist. And I think Congressman Scalise is nothing at all like a racist."

Furthermore, Kenny Knight, David Duke’s former campaign manager, said that while he invited Scalise to speak–the two men were neighbors–he spoke hours before the start of the white nationalist conference–and mostly with neighbors of the surrounding community.  Knight admitted that some white nationalists–probably out of curiosity–sat in on the address, but it was a very small number:

Kenny Knight, the former campaign manager for onetime Ku Klux Klan leader David Duke, said in an interview that he invited Scalise to speak to the civic group in the same hotel room used by Duke's European-American Unity and Rights Organization, but that it took place hours before the start of the white nationalists' meeting. Knight said he secured the hotel facilities for Duke's group, then invited the civic association, which he says he led, to meet about a string of neighborhood break-ins and other local issues while enjoying some of the coffee and cookies set out for Duke's group.

I basically gave him a town-hall meeting to address constituents about legislation he was working on,” said Knight, 65. “There were also other people who spoke before the civic association that day. One was from the Red Cross who talked about CPR. Another was Steve Scalise and there was a member of the local sheriff's department on instituting a crime watch group in our neighborhood. Steve and those folks spoke before the conference of EURO. It was not a EURO-sponsored event. I sponsored the event as president of the local civic association.”

Knight explained the Internet post of an apparent EURO attendee about Scalise's speech as “crossover in the hospitality room.”

“Some of the EURO members who came from out of town came to the hospitality room and sat in the audience,” Knight said. “Maybe a handful of the 25 people or so in the room were from EURO. The rest were all people from the neighborhood.”

Nevertheless, while the optics of this is abysmal, Speaker Boehner said in a statement that he stands behind Scalise. Scalise also regrets speaking at the event (via the Hill):

In a statement released by his office Tuesday, Scalise officially acknowledged that he spoke to the group while trying to “build support” for a plan to cut spending and tax hikes.

“One of the many groups that I spoke to regarding this critical legislation was a group whose views I wholeheartedly condemn,” he said.

“It was a mistake I regret, and I emphatically oppose the divisive racial and religious views groups like these hold.”