Republicans Could Be Overstating Importance Of Winning More Hispanic Voters 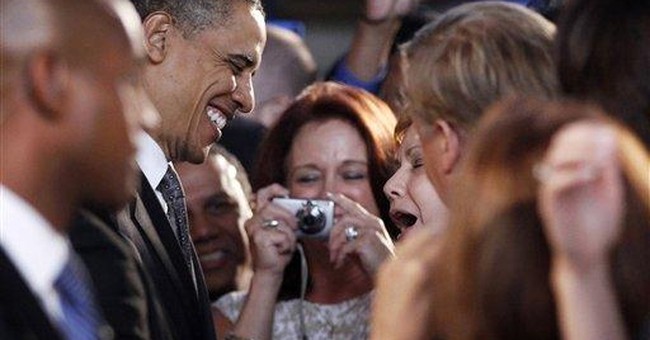 We know voter ID laws really don’t swing elections, but what about the other liberal talking point that demographics were to blame?

“Revenge of the white guys,” wrote liberal Amanda Marcotte that day after Democrats got decimated across the country.

So, is it true that a 2012 electorate would have brought better fortune to Democrats in 2014? Not really says Real Clear Politics’ Sean Trende.

For starters, President Obama was somewhat popular in 2012; he’s toxic right now. But let’s go through the numbers. Trende wrote [emphasis mine]:

If the 2014 electorate had resembled the 2012 electorate in terms of race, the Republican vote share would shrink by just 1.97 percentage points. In other words, in a 2012 electorate, Republicans would have won the popular vote for the House by 4.5 points, rather than 6.5 points. That’s not nothing, as they say, but it still only explains a relatively small share of the difference between the 2012 and 2014 results. Put differently, if Obama had put up the same vote shares among racial groups in 2012 as Democrats ultimately did in 2014, he’d have lost.

The 2014 electorate was, in fact, quite a bit older than the 2012 electorate. This isn’t necessarily surprising, given that the elderly population is actually set to grow substantially in the next decade. Regardless, if we reduce the 65+ share of the electorate from 2014’s 22 percent to 2012’s 16 percent, increase the 18-24 year old share from 7 percent (2014) to 11 percent (2012), and adjust everything in between accordingly, the Republican advantage contracts by ... 1.94 points.

Trende also compared the demographic shifts at the state level; comparing the 2012 and 2014 electorates and found that the changes aren’t significant. Yet, one notable exception is that Thom Tillis would have lost to Kay Hagan by a small 3.8 margin. The verdict: demographics represented a tiny proportion of Democratic troubles this cycle.

After all, Republicans just had better candidates this time around.

Yet, what about 2016’s demographic layout; shouldn’t Republicans be focused on making gains with Hispanics?

As he puts it, Republicans’ need to gain ground with Hispanics is not a necessity, but will make a 2016 GOP candidate’s road to the White House much easier. The Republican fixation with doing better with Hispanics is due to various 2012 post-mortem analyses showing that Obama did poorly amongst white voters, when he allegedly did “quite well” outside the south. But if the GOP wants to make gains with Latinos, the one state they should focus on is Florida (via NYT):

[I]n 2016 Hispanics will represent just 12 percent of eligible voters, and between 9 and 10 percent of actual voters. That’s a lot, but it’s not large enough to grant or deny Republicans the presidency.

Hispanic voters are disproportionately concentrated in noncompetitive states like Texas and California. This makes it even harder for the Republicans to claim the presidency by focusing on them, since there are relatively few Hispanic voters in the battleground states that determine who wins the Electoral College. Hispanics represent more than 5 percent of eligible voters in just three battlegrounds: Florida, Nevada and Colorado. As a result, the Republicans could have entirely erased Mr. Obama’s advantage among Hispanic voters and still lost the presidency in 2012, since Mr. Romney would have still lost states like Virginia and Ohio, where there are very few Hispanic voters.

The Republicans don’t have an especially credible path to the presidency without Florida’s 29 electoral votes. The easiest alternative might be for Republicans to flip Virginia and Ohio, scale the so-called Blue Wall in Pennsylvania, and then pick up 12 additional electoral votes from some combination of Colorado, Iowa, Wisconsin and New Hampshire.

Cohn added that modest improvements could erase Obama’s 1-point lead, which gave him the state in 2012. But the white share of the vote in Florida is a weird mix of old, southern, and Jewish, which could be receptive to a Hillary candidacy, making improvements with Hispanics utterly worthless. Still, the GOP knows inroads with this community is critical, it just may not be the “evolve or die” approach that everyone has been suggesting in the media.

Cohn lists Iowa, Minnesota, Oregon, Wisconsin and New Hampshire as examples of predominately white states where Obama won in 2012. Obama won the white vote in Iowa [51/47], Oregon [54/44], and New Hampshire [51/47]–and remained competitive in Wisconsin [51/48 Romney] and Minnesota [49/48 Romney]. Yet, these are states, with the exception of Iowa (went to Bush in 2004) and New Hampshire*, that have voted Democratic since 1988–and Oregon’s urban areas–traditional Democratic strongholds–(Portland) carried the state in 2012.

They’re also in regions where the Obama’s share of the white working class vote is the highest, albeit below 50 percent.

As I mentioned in a previous post, white working class votes are a huge bloc of voters–and they’re breaking for Republicans. To say that Obama had catastrophic results with whites in the South is true, but it extends beyond that region (via New Republic):

Many Democrats would prefer not to have to face this monumental organization challenge, hoping instead that the existing Obama coalition and demographic changes in America will prove sufficient to elect a president in 2016, hold the Senate, and weaken GOP control over the House of Representatives. But the harsh reality for Democrats is that they cannot achieve all three of these objectives without increasing their support among white working class Americans—and if Democrats keep telling themselves that "the problem is just the South," that support may decrease instead.

So, it seems that while Republicans really might not need as much Hispanic support (GOP should go after this shiftable voting bloc), Democrats definitely need to find ways to bring more working class white voters back into the fold, which is quite the homework assignment.

That being said, anything can happen. We have some time before 2016.