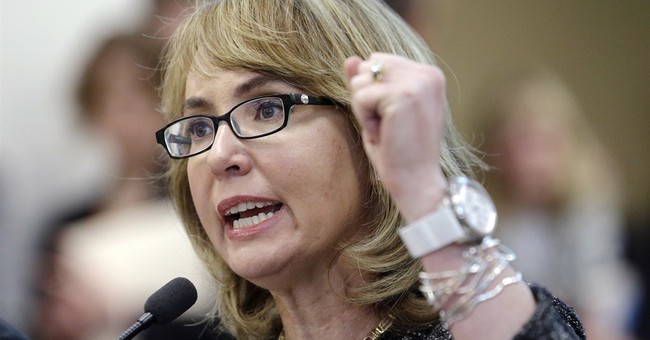 Gabby Giffords has unleashed a few anti-gun ads that some are calling downright “mean.” After her attempted assassination by the mentally unbalanced Jared Lee Loughner, the former Arizona congresswoman has become one of the leaders in this renewed effort to promote gun control through her Americans for Responsible Solutions (via Politico):

Gabby Giffords, irreproachable figure of sympathy, has fashioned an improbable new role for herself this election year: ruthless attack dog.

The former Democratic congresswoman, whose recovery from a gunshot wound to the head captivated the country, has unleashed some of the nastiest ads of the campaign season, going after GOP candidates in Arizona and New Hampshire with attacks even some longtime supporters say go too far.

Some of the toughest spots from Giffords’ newly formed pro-gun-control super PAC, Americans for Responsible Solutions, hammer Republican Martha McSally, a retired Air Force pilot who is running for the Arizona seat Giffords once held. One features a wrenching testimonial from a woman named Vicki who weeps and stumbles over her words as she recounts how her 19-year-old daughter was hunted down and murdered by an enraged ex-boyfriend.

“He had threatened her before. I knew. I just knew,” Vicki says. A narrator then declares that McSally “opposes making it harder for stalkers to get a gun.”

It’s no accident that Giffords is singling out McSally, people close to the former congresswoman say.

Another anti-McSally ad features a woman named Carol who says her daughter was killed by a criminal who bought a firearm at a gun show and didn’t receive a background check — a check, she states, that McSally would oppose.

“To McSally, it’s just politics,” Carol says as she clutches a picture of her deceased daughter. “To me, it’s personal.”

Giffords also is going after Marilinda Garcia, a New Hampshire congressional candidate who, viewers are told, has “strange ideas” on gun laws. Another GOP hopeful in the Granite State, Frank Guinta, is ripped for “support[ing] the loophole that lets stalkers buy guns without a background check, no questions asked.”

This is outrageous. It’s angry. And it won’t work. The Arizona Republic, who endorsed Giffords in 2008, said the ad against McSally was “base and vile:”

But, of course, McSally had nothing to do with these deaths.

The ad is meant to help Democratic incumbent Ron Barber in his bid for re-election. It is emblematic of a wave of tough new advertising the gun-control lobby pushed out after the slaughter of children and teachers at Newtown, Conn. did not result in meaningful gun-control legislation.

The anti-McSally ad is more than hardball politics. It is base and vile. It exploits a family's tragedy to score cheap political points.

And when the ad makes news because it goes too far, Gabrielle Giffords makes news with it. Because it's her group.

So we ask again, Americans for Responsible Solutions, do you know what you're doing?

Here’s the good news. The ad featuring the mother talking about how her daughter and husband were killed by a stalker has been pulled because it wasn’t entirely accurate (via NRO):

In the (now pulled) commercial, Giffords’s team accuses the candidate of failing to care about women who have been stalked and of objecting to laws that make it tough for stalkers to get guns — both of which charges, it turns out, are false. McSally, the Arizona Republic reports, has not only been a victim of stalking herself, but she supports all the existing laws that make it tough for convicted stalkers to obtain firearms. Oops.

“Being shot in the head by a lunatic,” my colleague Kevin Williamson proposed bluntly last year, “does not give one any special grace to pronounce upon public-policy questions.” Nor, he added for good measure, “does it give one moral license to call people ‘cowards’ for holding public-policy views at variance with one’s own.”

I know anti-gun liberals are going haywire over this phantom epidemic of gun violence, but let’s go through this again; firearm-related homicides have dropped 39% between 1993-2011. Nonfatal firearm crimes have dropped 69 percent in that same period, according to Bureau of Justice Statistics. This reported in the Washington Post  last year:

And here’s more data on the subject by Pew Research:

Additionally, you could argue that the McSally ad makes the case for why more women should exercise their Second Amendment rights. Many already are doing so across the country; they’re the fastest growing demographic of gun owners.

As for the gun show loophole, it’s mostly a myth. When I was working for CNSNews.com, I went to the Nation’s Gun Show, the largest gun show in the D.C. area, with my colleague Dan Joseph who asked vendors what the process was to buy a gun at the show.

I can understand why the anti-gun left is spewing fury on the airwaves. They haven’t had a major legislative victory on this issue since 1994; they got rolled in the Colorado recall elections where women, Hispanics and blue-collar workers booted two pro-gun control senators; and 58 percent of moderate voters (the ones needed to move the needle on this issue) “say existing gun laws are sufficient to keep their community safe.”

So, Giffords can become engulfed in rage.  In the end, she, and others like her, are just throwing a temper tantrum whilst the rest of the country gets on with their lives and enjoys exercising their Second Amendment rights.