The NRA Is Going After Michael Bloomberg 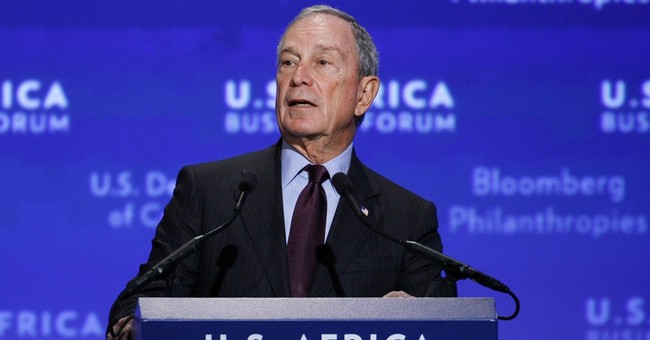 President Barack Obama isn’t the most helpful politician to Democrats this election cycle, but there could be another “boogeyman” in this election cycle: Michael Bloomberg. The National Rifle Association launched an offensive against this anti-gun activist earlier this week–and it’s about time (via Washington Post):

The National Rifle Association announced Tuesday that it is kicking off a multimillion-dollar campaign that will extend beyond November to tar the reputation of Michael Bloomberg, perhaps the country's most powerful gun control activist. The NRA launched a TV ad that slams Bloomberg not only on his gun policies, but also over his push as mayor of New York City to ban large sugary beverages.

In other words, they want to give you lots of reasons to dislike the guy.

The NRA is aiming at Bloomberg, not specific candidates, the organization says. But the ad campaign -- which includes both online and television components -- just happens to be headed for some of the biggest battleground states of the 2014 election, like Colorado, North Carolina and Kentucky.

Personality often complements policy in campaigns. The NRA is wagering that by casting Bloomberg as a wealthy Northeastern elitist who wants to tell people how much soda they should have, they'll arouse more anger about his gun control agenda.

With Bloomberg’s defeats in the Colorado recall and most recently in the primary for Milwaukee County Sheriff, the nation’s oldest civil rights organization sees that they can cut the Achilles tendon of the anti-gun left.

Even Milwaukee County Sherriff David A. Clarke Jr. touched upon these points in his op-ed for the Washington Times, slamming Bloomberg for his hubris and having little political acumen when it comes to pushing his agenda via his effete organization [emphasis mine]:

Mr. Bloomberg, the former mayor of New York, made a huge political miscalculation when he sauntered into my territory of Milwaukee County, Wis. — a solid-blue county that overwhelmingly votes Democrat — expecting an easy signature win for his failing crusade to disarm law-abiding Americans.

According to one Democratic Party source, Mr. Bloomberg said of his attempt to knock me off in my re-election primary for sheriff, “This one is personal with me.” That is a sign of desperation. Yes, even billionaires can be greedy. Surely, Mr. Bloomberg saw me as an easy win that he could parade around the country as a warning to other pro-gun candidates to either get in line with his anti-gun movement or face defeat at the polls. He saw picking off a big-city, pro-gun sheriff as a prize worth landing.

This was no ordinary defeat for Mr. Bloomberg’s “Mayors Against the Second Amendment” group. Losing to a local sheriff in a county dominated by Democratic Party voters just might have set his futile movement back to a point of no recovery.

As for Bloomberg’s hubris, it’s almost stomach churning; the guy thinks he’s earned himself a spot in heaven. Yet, the NRA could potentially disseminate a devastating narrative against the pro gun control crowd with this urban/rural dichotomy they’re aiming to highlight.

In December of 2012, then-Mediaite editor Noah Rothman noted that even squishy New York Times Republican David Brooks warned that Bloomberg being at the helm of the anti-gun movement isn't going to work:

One of the problems with this debate; it’s become a values war. It’s perceived as urban versus rural. And, frankly, it’s perceived as an attack on the lifestyle of rural people by urban people. And, I admire Mayor Bloomberg enormously – there’s probably no politician I agree with more – but it’s counterproductive to have him as the spokesperson for the gun law movement. There has to be more respect and more people, frankly, from rural and red America who are participants in this.

Given Second Amendment rights’ success–legally and legislatively–in the past couple of years, Mr. Brooks seems to have hit the bullseye with this prediction.