Poll: 42 Percent Feel Obama Expanded Power Of The Presidency 'Too Much' 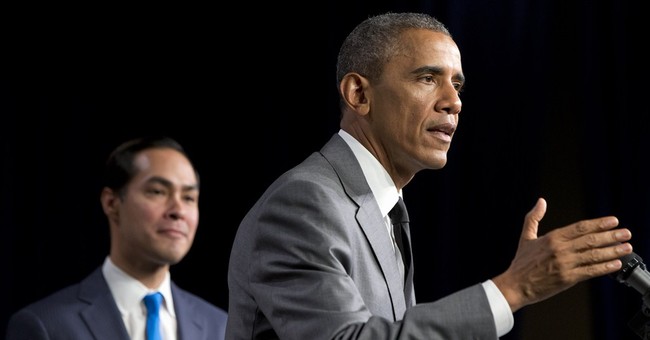 Yesterday, Reason-Rupe poll released their latest political poll and to no one’s surprise; Americans are souring on the Obama presidency. Forty-two percent of Americans say they feel Obama has expanded the power of the executive too much.

As for the direction of the country, only 33 percent think we’re on the right course, with 60 percent saying we’re heading in the wrong direction. The rest of the poll is similar to what other news outlets have reported about the president’s job approval and handling of foreign policy. The Reason-Rupe has President Obama at a 43 percent job approval rating, with 37 percent approving of how he’s handling foreign affairs.

Concerning the 2014 elections, 33 percent want to see the Republicans take control of Congress, compared to 29 percent who want to see the Democrats in charge. Yet, given Congress’ abysmal approval ratings, 34 percent wouldn't mind seeing neither party in control after Election Day.

Also, 39 percent of likely voters said that the economy would be the top issue on their mind when they enter the polls come November. While it may not be a surprise that about half of Democrats said they hold favorable views on socialism, the 26 percent of Tea Partiers who agreed with them seems to be extraordinary high for a voting bloc dedicated to limited government and free market economics. At the same time, 50 percent of Americans said they’re open to allowing states to repeal federal laws. (via Reason): [emphasis mine]

The American public appears to be open to a series of constitutional amendments that have been proposed. Eighty-four percent of Americans favor requiring members of Congress to be subject to all of the laws they pass. Nearly three-quarters of Americans, 74 percent, support an amendment requiring the federal budget to be balanced. And 57 percent favor the so-called Citizens United amendment that would allow Congress and states to regulate campaign contributions and spending. However just 26 percent of those who support a campaign finance amendment would still favor it if it gave Congress or states the power to regulate activities such as publishing books or blog posts that support or oppose political candidates.