Will Perry's Leadership On The Border Revive His Presidential Appeal? 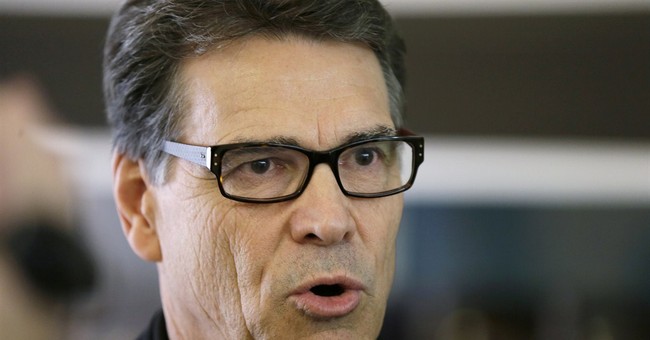 If there’s anything that will rehabilitate Texas Governor Rick Perry’s image as a presidential candidate, it’ll be how he’s handling the border. In 2012, Perry briefly took the top spot within the Republican field for president only to see his support evaporate after a couple of debate performances that one could only describe as disastrous.

Perry’s hunting location with a racially insensitive name also elicited some controversy, but where he saw his conservative support evaporate was over his bill that provided in-state tuition for illegal aliens.

At the recent RedState Gathering in Texas, Perry’s leadership on securing the border is having a positive effect on his reputation. Kevin wrote that his speech to the attendees covered all the topics conservatives like to see their candidates espouse on the campaign trail. Perry touted his economic record, criminal justice reform, and how the Lone Star state is the mecca for high-tech exports. Such rosy economic news isn’t what’s being disseminated at the national level.

As for his bill allowing illegals to receive in-state tuition, some feel that his leadership on the border has “inoculated” himself from those attacks on the right, others aren’t so sure (via NRO):

“The people who are here this year who have been deeply skeptical of him in the past are seeing the whole national guard issue and securing the border and suddenly reacting to him differently than they did in the past,” RedState editor Erick Erickson told National Review Online after Perry’s speech Friday at the RedState Gathering in Fort Worth. “They don’t think he’s squishy on the issue since he’s sending the soldiers.”

Perry was the morning star of the conference, though. “If Washington won’t act to secure the border, as the governor of Texas, I will,” he declared, eliciting a 22-second standing ovation.

“Dealing firmly with what’s happening on the border now will to some degree inoculate him from statements in the past,” DeMint told NRO during a Friday interview. “And so, we’ll see how it plays out. There’s no one who will run who hasn’t made a statement or voted for something that wasn’t exactly what they would want now.”

Heritage Action and other conservatives have used the same “magnet” metaphor deployed against Perry to describe President Obama’s immigration policies, though. Is it easy for a presidential rival to say that Perry and Obama’s magnets helped create the border crisis?

“It’s all rhetoric, it’s all done in front of the cameras,” Katrina Pierson, a close ally of Senator Ted Cruz (R. Texas) — she was an early supporter of his Senate campaign and Cruz’s father, Rafael, endorsed her congressional bid — told NRO. “Just going back to the last legislative session, he could have ended sanctuary cities, he could have ended all kinds of magnets.”

Let’s see what happens. It’s not like the 2016 race is over for Republicans if Perry decides to sit it out. But for now, Perry is certainly highlighting he's a leader on immigration enforcement, which is a red meat issue for conservatives due to Washington inaction.