Is Senator John Walsh Going To Drop Out? 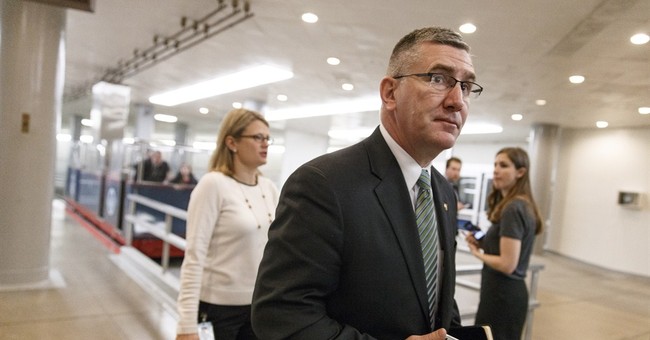 After Democratic Montana Senator John Walsh admitted to improperly attributing sources in his Masters paper at the U.S. Army War College, he said he had Post-Traumatic Stress Disorder, but did not blame his lapse in judgment on it. Nevertheless, it angered some veterans that he would even referenced it. Now, the rumor mill is saying that national Democrats are trying to initiate a secondary protocol, which includes showing Sen. Walsh the exit.

In December of 2013, my colleague over at Hot Air, Jazz Shaw, wrote about the “Big Sky buyoff,” which saw then-Montana Democratic Senator Max Baucus resign to become Ambassador to China and then-Lt. Governor John Walsh taking his spot in the hopes of retaining the seat for Democrats come 2014.

Now, with Sen. Walsh's academic malfeasance, that may not be possible–and it’s rumored that a replacement candidate is being discussed.

So, what’s going to happen here?

FLASHBACK: Walsh being appointed to fill Sen. Baucus' vacancy was seen as a "positive development" for Democrats in their efforts to hold their Senate majority last December:

It's the rare recent positive development for Montana Democrats. The party's chances of retaining the Senate seat dimmed considerably in the spring when Baucus surprisingly opted against seeking reelection, a loss compounded when former Gov. Brian Schweitzer unexpectedly declined to mount his own campaign, during the summer.

But now, just as the seat seemed to be slipping out of their reach, the race changed in Democrats' favor. They still likely enter the election as underdogs, but their chances suddenly look better.

Also, the plagiarism fiasco has probably killed Walsh in the authenticity department, which is critical this year:

One of the most underappreciated attributes in politics is a candidate's authenticity. In an era when politicians' talking points are scripted, and they worry about a gaffe going viral, the candidate who comes across as genuine holds a real advantage. It's one reason why Barack Obama was able to defeat Hillary Clinton, why Mitt Romney struggled to capitalize on a favorable environment in 2012, and why someone like New Jersey Gov. Chris Christie is able to use his force of personality to overcome ideological differences with both Democrats and conservatives.

And the authenticity factor has played a critical role in this year's midterm elections, from the challenges red-state Democrats face in winning over skeptics to the problems establishment Republicans have faced in reaching out to the tea-party grassroots. Just take a look at the successful and flailing candidates this cycle, and a lot of the gap comes down to authenticity.

The Missoulian also called on Walsh to "resign his Senate seat immediately."

In its Sunday editorial, The Billings Gazette also urged Walsh to withdraw from the race, arguing that "haunted by a serious lapse in academic honesty, Walsh is finished as a U.S. Senate candidate."

"Having repeatedly said that he wants to do the honorable thing, Walsh should stop campaigning and do his utmost to serve Montanans well in the remainder of his brief Senate appointment," the editorial board wrote. "That is the honorable course."

The Gazette argued that Walsh should "finish the Senate job he already accepted."

UPDATE II: NBC Montana spoke with residents of Missoula, Montana. Their response to Sen. Walsh: Get out.

"I'm from Chicago and I know firsthand what corruption does and someone who plagiarizes another's work without giving sanction to it, he's corrupt. He should resign, get out," said Jim Kubeck.

"Plagiarism is a big deal and it's dishonesty in its purest form. If, in fact, he did, I think he definitely should drop out of the race and the democrats should find someone new," explained Barbara Behan.