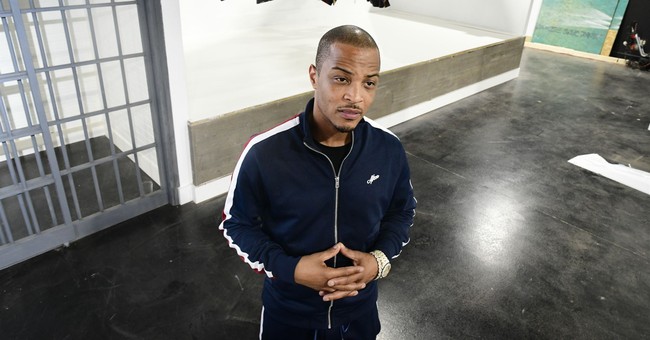 Melania Trump’s spokeswoman slammed T.I.’s “disgusting” new video showing a doppelganger of the first lady stripping for the rapper in the Oval Office.

“Dear 45, I ain’t Kanye,” the rapper tweeted along with the video teasing his new album “Dime Trap.”

The video clip shows the look-alike wearing nothing but stilettos and the infamous khaki jacket the first lady once wore that says, “I really don’t care, do u?”

She then performs a striptease on the Resolute Desk for the rapper.

“How is this acceptable,” Melania’s spokeswoman Stephanie Grisham tweeted in response, calling for a boycott.

'Just lost a fan T.I. How about I shoot a video like that with Tiny? I've overlooked a lot of your behaviour but this is just too disrespectful to be ignored. You are despicable,' one man said on Twitter.

Another woman said: 'No words can describe... Seriously I can't believe my eyes right now.'

She added: 'We are not just talking about a lady, she is the FIRST LADY of the US... the equivalent of the Queen of Spain or the UK.' (Daily Mail)

On Thursday, T.I. slammed Kanye West's meeting with Trump in the Oval Office, calling it "shameful."

“From what I can gather… This is the most repulsive, disgraceful, Embarrassing act of desperation & auctioning off of one’s soul to gain power I’ve ever seen,” he wrote.