Giuliani Responds to Release of Audio Tape. Here's What He Said. 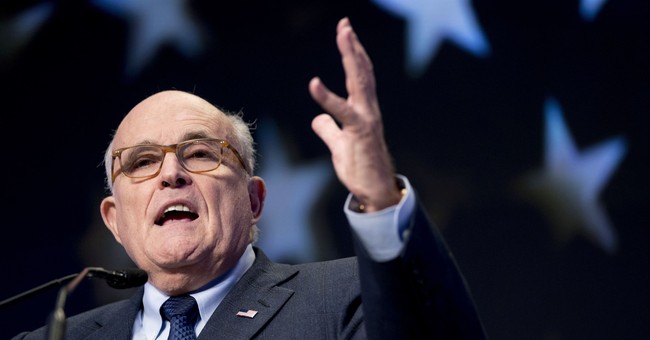 President Trump’s attorney Rudy Giuliani responded to the release of Michael Cohen’s secretly recorded tapes discussing possible payment to former Playboy model Karen McDougal, saying “there is no indication of any crime being committed on this tape.”

On the tapes, which were given to CNN Tuesday by Cohen’s attorney Lanny Davis, Cohen and Trump are discussing buying the rights to McDougal’s story alleging she had an affair with Trump.

"When it comes time for the financing," Cohen says on the tape before Trump cuts him off and asks, “What financing?”

"We'll have to pay," Cohen replies.

The beginning of Trump’s response is inaudible but “pay with cash” can be made out. Giuliani explained on Fox News’s “The Ingraham Angle late Tuesday that Trump told Cohen “Don’t pay with cash.”

The tape then cut off.

“There’s no way the president is going to be talking about setting up a corporation and using cash unless you’re a complete idiot and the president’s not an idiot," Giuliani told Fox News. “I agree with you the tape is a little bit hard to hear. But I assure you that we listened to it numerous, numerous times. And the transcript makes it quite clear in the end that President Trump says 'don't pay with cash.'

"Look, we’ve been over the tape over the weekend about five times," he continued. "What I urge people to do is go online and listen to your broadcast. Play the tape. Play it three times. The third time you play it, it will become clear.

“I've got 4,000 hours of mafia people on tape. I know how to listen to them, I know how to transcribe them. I’ve dealt with much worse tapes than this,” he added.

Giuliani also reiterated that the tape doesn’t incriminate the president in any way.

"I don’t think anyone can suggest that this represents anything where the president did anything wrong, and that’s the reason why we waived [attorney-client privilege]," he said.

.@RudyGiuliani on the Michael Cohen-Trump secret recording: "There's no indication of any crime being committed on this tape." pic.twitter.com/1yOGz8uU2O

Giuliani also slammed Cohen over the secret recording, calling it “outrageous” than any attorney would do that.

"The major point is, it's outrageous that someone would tape his client surreptitiously," he said.

.@RudyGiuliani on the Michael Cohen-Trump secret recording: "The major point is, it's outrageous that someone would tape his client surreptitiously." @IngrahamAngle pic.twitter.com/TsfidkfvDU

Giuliani argued Cohen should be disbarred over the recordings.

"I question the strategy of doing it, of trying to make the tape say what it doesn’t say, or putting out a tape in which you’re kind of proud of the fact that you’re a lawyer taping your client and then thinking you could cooperate with the government?" he said. "In order to cooperate with the government, you got to have credibility. The first thing that happens is this guy is going to be disbarred. I mean, it’s ridiculous. He’s a pariah to the legal profession."