Report: Networks Give 129 Times More Coverage to Women's March on Washington Than March for Life 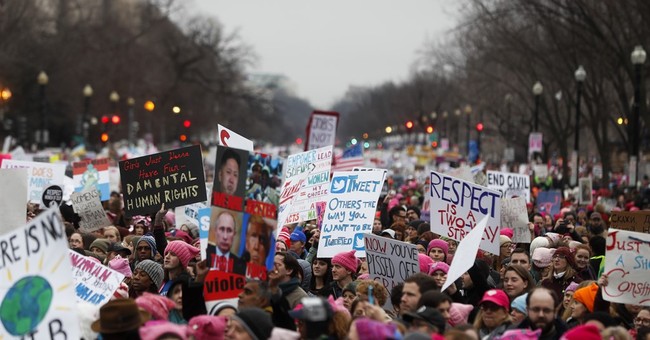 The Women’s March on Washington drew hundreds of thousands of protesters to the nation’s capital last weekend, and, as such, was covered by all the major networks—a lot. But how will the Big Three—ABC, CBS, and NBC—cover this Friday’s March for Life, which draws equally impressive crowds every year? If 2016’s March for Life is any indication, the disparity in coverage between the two events is massive.

According to the Media Research Center’s analysis, the networks covered the Women’s March on Washington 129 times more than 2016’s March for Life.

The difference, of course, is the event that was covered was pro-abortion while the other, largely ignored event, is pro-life.

During their morning and evening news shows, the three broadcast networks (ABC, CBS, NBC) covered the women’s march 129 times more than they did the 2016 March for Life last year. And it’s anyone’s guess as to whether or not they will cover the 2017 March for Life Friday.

Held the day after the inauguration, the women’s march brought hundreds of thousands together (millions worldwide) to tell the new administration that “women’s rights are human rights.” Except, according the march’s pro-abortion platform and its behavior towards pro-life organizations, “women” doesn’t include all women. That became even clearer when organizers removed pro-life group New Wave Feminists from its partner list.

As the largest annual march in Washington, D.C., the March for Life laments abortion and celebrates human life on or around the anniversary of the Supreme Court’s 1973 Roe v. Wade decision.

ABC, CBS and NBC spent at least one hour, 15 minutes and 18 seconds on the women’s march. But for the 2016 March for Life, they devoted an embarrassing 35 seconds (22 seconds following the march, 13 before).

As the MRC notes, this pattern of coverage of the March for Life, or lack thereof, has been consistent over the years. That’s why the organization, in partnership with other groups, launched the Alliance for Fair Coverage of Life Issues in an attempt to hold the media accountable.

“This Friday is a true test for the media,” MRC’s President Brent Bozell said in a statement. "They provided massive, and fawning coverage of the pro-abortion ‘Women’s March’ just four days ago. The media’s coverage of the ‘March for Life’ in two days, both in time and tone, will tell you everything you need to know about their support for abortion. With media’s trust in the basement, they will be exposed for the partisan hacks they are if they don’t give pro-lifers the same amount of coverage. I’m not holding my breath.”