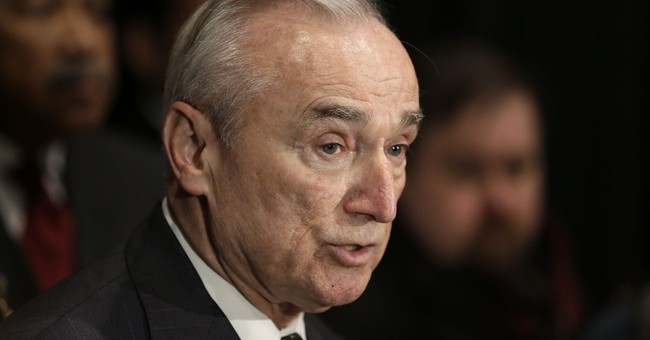 New York City is and likely will remain the No. 1 terrorist target in the world. And with the rise of ISIS, it’s no wonder New York City Police Commissioner Bill Bratton is taking the threat seriously—so seriously that he wants 450 police officers to focus on the terrorism threat stemming from ISIS alone.

“We need to be very concerned about terrorism … The significantly increased threat from ISIS using social media to recruit people not only to go to Syria to fight, but encouraging people … to attack police, to attack government officials, to basically brainwash them under their screwed-up ideology. That threat has expanded significantly in the now 16 months I’ve been police commissioner,” Bratton said on the John Catsimatidis radio show.

“We’re treating that threat so seriously, I’m going to put another 450 police officers – if we get the approval to increase the size of the police force – and I need to do it very very quickly – into our counterterrorism operations to increase the ability of our officers to protect critical sites around the city. Or, if we were to have an incident, so I’d have a lot more officers in the streets with the appropriate equipment to deal with active shooters or hostage situations.

“We are entering a new era where we cannot live in fear, but we have to live increasingly aware of our surroundings … This crazy hijacking of the Muslim religion by these fanatics, twisting it into an ideology that’s all about hate and murder and killing.”

The commissioner's plan comes as polling shows that a majority of Americans believe terrorists are likely living in their communities.

Editor's note: This article has been updated to correct Commissioner Bratton's title.