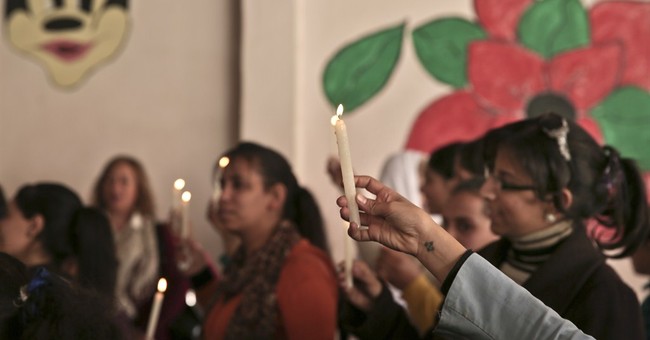 Relatives of the Coptic Christians who were murdered by ISIS in Libya last month are now facing violent attacks of their own—all for wanting to build a church to honor their loved ones.

An angry mob in the Upper Egyptian village of Al Our – the proposed site of the church because it was home to 13 of the 21 Christians murdered in the mass “beachfront” decapitation – descended on the community’s current church after the midday Islamic prayer Friday and chanted that they’d never allow construction of the new place of worship to begin, witnesses told Egyptian activists in the U.S.

Things turned far uglier after nightfall, the witnesses said, as a smaller number of individuals threw Molotov cocktails and stones at the church, injuring several people, and setting cars ablaze, including one that belonged to a relative of one of the victims of the Libyan massacre.

“The police came, but after the attack,” said Mina Abdelmalak, a Coptic Christian living in Washington who is in close contact with the witnesses to the events in Al Our. “There were already cars on fire. People had been bloodied. Stones and bricks had been thrown.”

The Coptic Christians from Al Our first sought permission from Egypt’s president, Abdel Fattah al-Sisi, to build the church, which until recently has been a customary requirement for the religious minority in the country. No such permission is required to build mosques, however.

Even with al-Sisi’s consent, however, local Muslims objected, particularly over its location near the entrance to the village.

“This is a classic issue in Egypt,” Abdelmalak said, reports Fox. “Even after you struggle to get permission from the president to build a church, you still have to face the mob, which rejects the idea of having a church built in their neighborhood.”

A new location outside the village is now eyed following a meeting between Muslim and Coptic residents that the regional governor brokered.

“This has been effectively imposed on the Coptic residents,” Abdelmalak said. “Dictates to the Christian community are always presented as agreements.”

While police did arrest some members of the mob who participated in the attacks, they were released a few hours later.

Egypt currently ranks No. 21 on Open Doors’ annual list of the most dangerous places in the world to be a Christian.