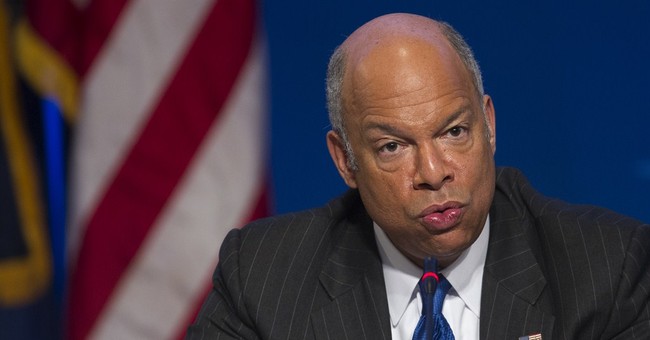 DHS Secretary Jeh Johnson told Fox News host Bret Baier on Sunday that the reason the president refuses to say 'radical Islam' or 'Islamic extremism,' preferring to use 'violent extremism' instead, is essentially because the Muslim community doesn’t want him to.

“The thing I hear from leaders in the Muslim community in this country is ISIL is attempting to hijack my religion,” Johnson told “Fox News Sunday,” referring to the terror group also known as Islamic State, or ISIS.

Johnson said the leaders argue their religion is about peace and brotherhood and “resent” that Islamic State is “attempting to hijack that from us.”

President Obama defended his word choice on Wednesday, saying that ‘radical Islam’ gives the terrorists a religious legitimacy they don’t deserve. And Johnson echoed that argument on the major Sunday talk shows.

“To refer to ISIL as occupying any part of the Islamic theology is playing on a battlefield that they would like us to be on,” he said. “I think that to call them some form of Islam gives the group more dignity than it deserves frankly. It is a terrorist organization.”

Johnson also said he was more focused on the potential for Islamic State, with an estimated 30,000 fighters in Iraq and Syria, to recruit Americans and inspire them to carry out terror acts.

“Whether it's referred to as Islamic extremism or violent extremism, what it comes down to is ISIL is a terrorist organization that represents a serious potential threat to our homeland which has to be addressed,” he said. “I’m more concerned about that frankly than I am what two words we use to refer to them.”

But many on both sides of the political aisle are frustrated that the president refuses to call radical Islam what it is.

“If we don’t identify our enemies, we cannot defeat them,” Rep. Tulsi Gabbard, D-Hawaii, told Fox News on Wednesday. “Unless you accurately identify who your enemy is, then you can’t come up with an effective strategy, a winning strategy to defeat that enemy.”

Republican Sen. Ted Cruz went even further on Wednesday, calling President Obama an “apologist for radical Islamic terrorists” over the administration’s rhetoric and approach to ISIS.