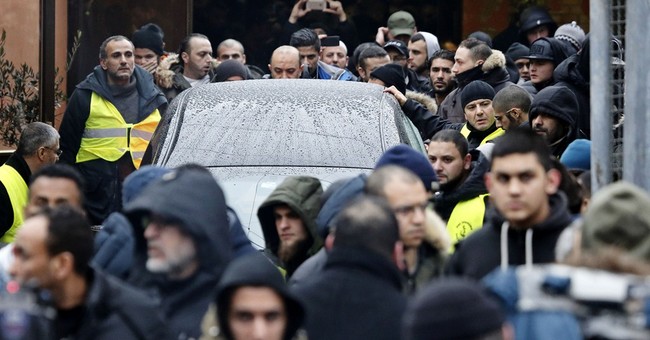 The terrorist who went on a shooting spree in Copenhagen last weekend was buried on Friday, and to say it was well attended would be an understatement.

Approximately 500 people came to mourn the death of El-Hussein, who killed two people in his attacks at a free speech event and synagogue. The crowd at the funeral prayer was so large many had to remain outside the building.

Omar El-Hussein, 22, was placed in an unmarked grave in the Muslim cemetery in Broendby, on the outskirts of Copenhagen, watched by around 500 people, mostly young men wearing thick black jackets against the cold and rain, an AFP reporter said.

El-Hussein, a Danish citizen of Palestinian origin, has been identified by police as the gunman who shot dead two people -- a filmmaker and a volunteer Jewish security guard -- in the Danish capital last weekend.

Before the burial, a short ceremony was held at a Copenhagen mosque following Friday prayers.

A man of east African origin, who refused to give his name, told AFP about the ceremony: "There were a lot of young people that you don't normally see there... because they knew Omar. Some of them were gang members.

"They are my brothers too because they believe in Allah and the Prophet Mohammed, but their lifestyle doesn't have a lot to do with Islam," he said.

A handful of those who were there he recognized as members of the Islamist group Hizb ut-Tahrir, but there were also many "normal Muslims," the man said.

"A Muslim cannot be denied a funeral. God will judge him," he said.

A young man who said he knew El-Hussein described him as "normal".

"He just made the wrong choices, I do not see him as a terrorist," said the man, who gave his name as Mohammed.

El-Hussein had been linked to a criminal gang formed on the Copenhagen inner-city estate where he grew up.

Some of those who attended the funeral had covered their faces with scarves and hoods.

The man who conducted the burial ceremony dismissed suggestions that the large crowds were there as a show of support for El-Hussein. “It is support for the family, not for him,” he said, reports the Daily Mail. “I do not think that anyone is coming to pay homage to him.”

But as Daily Beast columnist Michael Moynihan points out, many of the young men in attendance were making the single finger ISIS sign, which means much more than simply ‘We’re No. 1.”

This is chilling, to say the least.