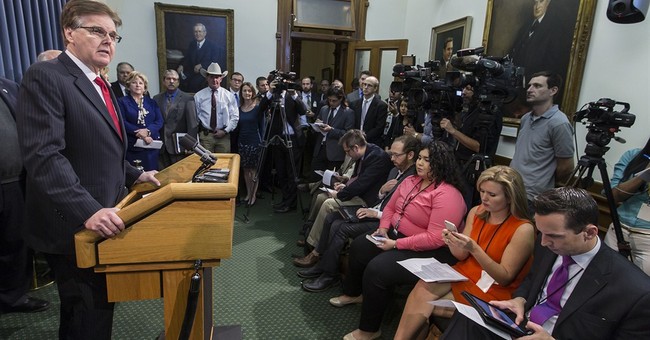 If Texas officials get their way, the National Guard may be sticking around the Lone Star State for longer than expected.

Texas Gov. Rick Perry deployed roughly 1,000 National Guard troops to help defend the border last summer after an influx of illegal crossers left law enforcement agents overwhelmed, and the border completely vulnerable to drug cartels and traffickers. Since then, however, troop levels have been steadily winding down as the March exit date draws closer and as the number of illegal crossers has declined.

That, however, could all change.

Lt. Gov. Dan Patrick said intelligence indicates that in anticipation of the Guard leaving, drug cartels have been ramping up their operations, meaning it’s no time to pull out now.

Gov. Greg Abbott did not attend the announcement and no plans have been formalized. But an extended Guard deployment is the latest signal that Texas' new conservative leadership is planning record state spending on border security, even while acknowledging that illegal crossings have slowed dramatically.

Patrick, who also took office in January, would not say how many Guard troops would remain. He said maintaining the mission through May would cost an extra $12 million, and that he expects Abbott to call for emergency spending to keep the Guard on the border through August.

"We cannot pull back now," Patrick said. "Under no circumstance should we have a complete pullout of the National Guard next month."

Patrick said that new intelligence indicates that drug cartels have been "ramping up" in anticipation of the Guard leaving. He also made a point, however, to say he disagreed with the decision made by his predecessor in November to wind down the mission.

But many are questioning whether the continued presence of the National Guard at the border is the most cost-effective way to keep the border secure, and if the Guard is the most appropriate group to continue having on the ground.

For example, Maj. Gen. John Nichols, the commander of the Texas National Guard, is pushing back against Patrick’s proposal, arguing that extended missions are not what the National Guard was intended to be used for.

Major General John Nichols told committee members the guardsmen are not meant to operate on an extended basis, explaining that their longest deployment before this one lasted only about two weeks. They have now been on the border for half a year.

Nichols eventually asked committee members for “predictability” in regards to deployment as he said it makes it harder on the guardsmen, who have to leave their families behind.

Otto sympathized, saying “These are men and women who have lives back home.” He went on to ask Nichols if extending the deployment would harm morale.

“Yes sir,” Nichols responded. “We’re going to serve, but what I would ask humbly would be predictability.”

A decision for a longer deployment of the Guard has not yet been made.