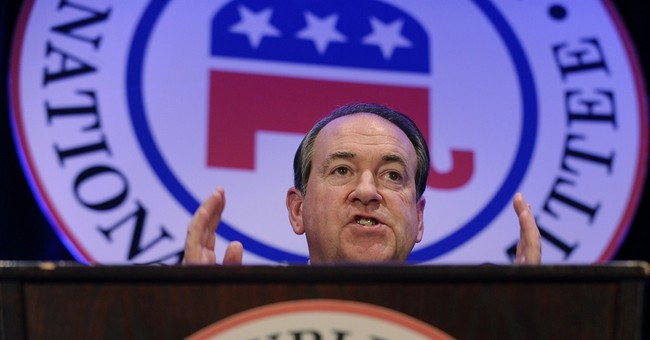 To former Arkansas Gov. Mike Huckabee, faith absolutely trumps politics, so much so that he has no reservations about casting off the R beside his name if the GOP abandons its opposition to same-sex marriage.

“If the Republicans want to lose guys like me — and a whole bunch of still God-fearing Bible-believing people — go ahead and just abdicate on this issue, and why you’re at it, go ahead and say abortion doesn’t matter, either,” Huckabee said on the American Family Association’s radio show this week during a discussion on gay marriage.

“Because at that point, you lose me,” he continued. “I’m gone. I’ll become an independent. I’ll start finding people that have guts to stand. I’m tired of this.”

Huckabee’s comments came after the Supreme Court announced earlier this week that they will not take up gay marriage, thereby clearing the way for same-sex marriages in Wisconsin, Virginia, Utah, Oklahoma, and Indiana. This, of course, provides an opportunity for some GOP candidates who wish to avoid the issue to do just that:

The Supreme Court’s decision Monday clearing the way for same-sex marriages in five states may benefit an unlikely group: Republican lawmakers who can’t wait to stop talking about gay marriage, an issue that is increasingly becoming a drag for the party.

Advisors to multiple likely 2016 candidates told TIME after the news broke that they are hopeful that swift action by the Supreme Court will provide them cover. “We don’t have to agree with the decision, but as long as we’re not against it we should be okay,” said one aide to a 2016 contender who declined to be named to speak candidly on the sensitive topic. “The base, meanwhile, will focus its anger on the Court, and not on us.”

“I am utterly exasperated with Republicans and the so-called leadership of the Republicans who have abdicated on this issue when, if they continue this direction they guarantee they’re gonna lose every election in the future,” Huckabee said. “Guarantee it.”

“And I don’t understand why they want to lose,” he continued. “Because a lot of Republicans, particularly in the establishment and those who live on either the left coast or those who live up in the bubbles of New York and Washington, are convinced that if we don’t capitulate on the same sex marriage issue and if we don’t raise the white flag of surrender, and just accept it as inevitable, we’ll be losers.”

“I tell you,” he said. “It’s the absolute opposite of that.”