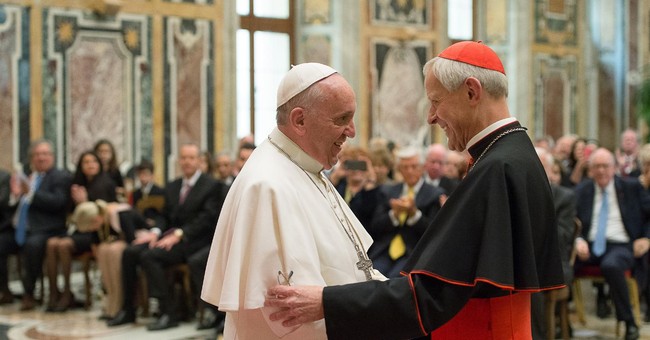 Pope Francis accepted the resignation of embattled D.C. Cardinal Donald Wuerl Friday months after allegations of sexual abuse cover-up against him surfaced in a Pennsylvania Grand Jury report. The allegations date back to when he was bishop of Pittsburgh from 1988 to 2006. Wuerl was named 170 times in the report and many of the faithful in the Archdiocese of Washington have been clamoring for his resignation.

The pope downplayed the allegations against Wuerl in his letter. He praised the cardinal’s “nobility” and asked him to remain as an Apostolic Administrator for the Archdiocese until his successor is named.

“You have sufficient elements to ‘justify’ your actions and distinguish between what it means to cover up crimes or not to deal with problems, and to commit some mistakes,” the pope claimed. “However, your nobility has led you not to choose this way of defense. Of this, I am proud and thank you.”

The pope’s claim is odd given that Wuerl did vigorously defend himself in this manner, initially denying wrongdoing in his handling of the cases in an August letter to priests arguing that “a just assessment of my actions, past and present, and my continuing commitment to the protection of children will dispel any notions otherwise made by this report.”

After public protests against him that included calls for his resignation from prominent D.C. Catholics, Wuerl did later partially apologize for any “errors in judgment.”

The Archdiocese of Washington also attempted to defend Cardinal Wuerl in this way by publishing a website called the Wuerl Record which praised him for his overall record on dealing with abusive priests. The archdiocese also attempted to explain away specific examples of Wuerl reassigning abusive priests. However, the website was taken down after wide criticism and the archdiocese admitted that it had been a “mistake.”

Wuerl’s “errors in judgment” include allowing a child molesting priest to remain in active ministry and arranging a settlement agreement requiring two brothers to keep quiet about their abuse by a priest while sending payments to their abuser after he was released from prison.

He also presided over the funeral of predatory priest George Zirwas and even claimed that “those who knew him can pray with great confidence that ‘this priest who proclaimed the gospel…might now receive the fulfillment of that gospel, life everlasting.’”

There is public court testimony that Zirwas was a member of a ring of predator priests who lured teenage boys with alcohol and sexually assaulted them and, according to the grand jury report, "used whips, violence, and sadism in raping their victims."

Cardinal Wuerl told The New York Times Friday that “he would continue to live in Washington and that he expected to keep his position in Vatican offices that exert great influence, including one that advises the pope on the appointment of bishops.”

In a comment marked by his customary humility, Wuerl called the pope’s letter a “very, very beautiful” recognition of his work to put his flock before himself.

In his letter regarding Wuerl’s resignation, the pope criticized “every kind of sterile division sown by the father of lies who, trying to hurt the shepherd, wants nothing more than that the sheep be dispersed,” a possible reference to the scrutiny the pope is facing over his own handling of the sex abuse scandal.

Pope Francis is under fire for his handling of allegations against former Washington archbishop Theodore McCarrick, including that he molested a teenager. McCarrick resigned his position and has been removed from public ministry pending a full investigation.

The pope said that he would not say a “single word” on the accusations and refused to even answer a question about when he first knew of McCarrick’s behavior. He told journalists to read Viganò’s letter and make their own conclusions.

The Pope has since upset many Catholics when, rather than addressing the horrific sexual abuse and cover-ups by Catholic bishops, he preached a homily saying “the Great Accuser” was attacking bishops to create scandal. He said the devil “tries to uncover the sins, so they are visible in order to scandalize the people.”

During the sex abuse scandal in Chile earlier this year, Pope Francis was forced to apologize for his own “errors in judgment” after calling accusations of cover-up against Bishop Juan Barros a “calumny” for years. He admitted to sex abuse survivors that he had been “part of the problem” in that instance. He accepted Barros’s resignation in June.