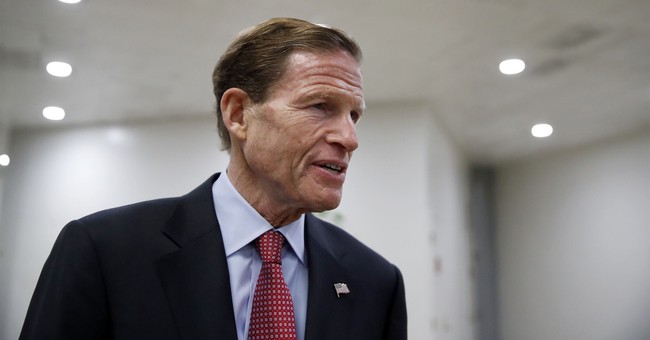 On Wednesday, Sen. Richard Blumenthal (D-CT) compared Russian interference into the 2016 election to the 9/11 terror attacks which killed thousands.

Blumenthal began by quoting the words of the Director of National Security Dan Coats about cyber threats.

“The red light is flashing, as the Director of National Security Dan Coats put it, much as it was before 9/11,” Blumenthal told CNN. “We are in a 9/11 national emergency because our country is under attack.”

“Literally that attack is ongoing and pervasive, verified by objective and verifiable evidence,” he emphasized. “Those words are, again from the Director of National Security, and this 9/11 moment demands that we do come together.”

He proceeded to join his Democratic colleagues’ calls for the American translator who was at Trump's private meeting with Putin Monday to appear before Congress for questioning.

“Issue a subpoena not only for the translator and the notes but also for the national security team that debriefed the president about these supposed agreements in the sphere of international security,” he urged.

“We need to move forward in the Congress, not only on this issue," he added, "but also to imposed sanctions – make the Russians pay a price – and also to expose Putin’s ill-gotten gains, his assets, hidden wealth around the world."