Michelle Obama Says 2016 Election Makes Her Concerned 'About Us, As Women' 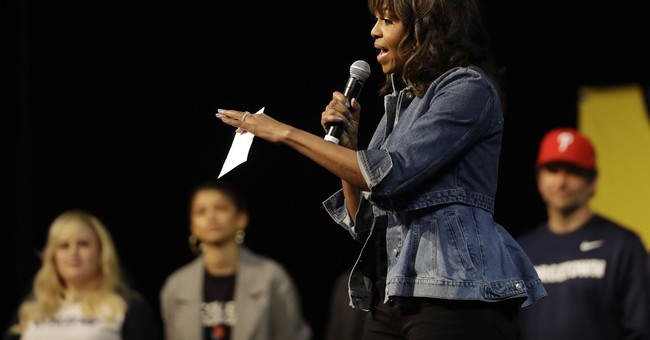 Former first lady Michelle Obama reflected on the 2016 election Saturday at the United State of Women Summit in Los Angeles. She said that the election results make her concerned “about us, as women,” speculating that Hillary Clinton’s loss is really about people not being comfortable with a woman as president.

"In light of this last election, I'm concerned about us, as women, and what we think about ourselves and about each other," she said. "What is going on in our heads where we let that happen, you know? So I do wonder what are young girls dreaming about, if we're still there?"

Obama went on to argue that Clinton losing says something about “where we are” as women and added that women are suspicious of one another.

"When the most qualified person running was a woman and look what we did instead,” Obama emphasized. “I mean, that says something about where we are, if we as women are still suspicious of one another, if we still have this crazy, crazy bar that we don't have for men ... if we're not comfortable with the notion that a woman could be our president, compared to what?"

“You know many of us have gotten ourselves at the table but we’re still too grateful to be at the table to really shake it up,” she said.

When the crowd cheered the idea of Obama running, she said “that’s not the answer,” explaining that she’s not any different than Clinton.

"When I hear people say, 'You run,' it's part of the problem,” she claimed. “We still didn't get 'Yes we can' right. It's not yes you can, it's yes we can. And until we get that right, it doesn't matter who runs. And look, I don't think I'm any different from Hillary."

Clinton herself has repeatedly cited sexism and misogyny as reasons she lost the 2016 election, even going so far as implying that women who voted for Trump did so at the bidding of their husbands.

This is not the first time Michelle Obama has criticized women who did not vote for Clinton. In September, she claimed that "any woman who voted against Hillary Clinton voted against their own voice in a way."