Kansas Has The GOP Breaking a Sweat 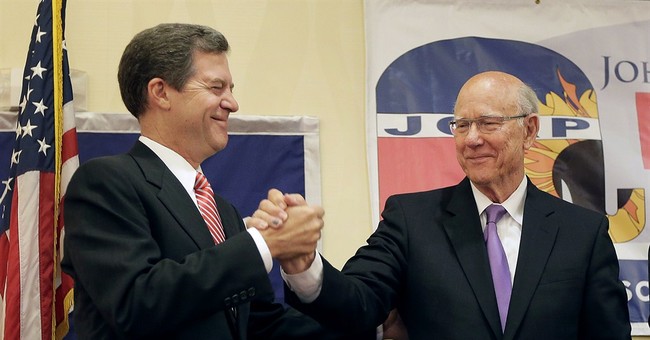 The fight to withhold a Republican Kansas has puzzled political pundits since the campaign started. Republican Senator Pat Roberts has been struggling against Independent Greg Orman, a candidate who doesn't even give an opinion on big issues.

The gubernatorial race has also been a long-winded fight for the GOP. Republican Governor Sam Brownback hasn't been able to take the lead against Democrat Paul Davis.

Townhall's Poll Tracker shows the average of several polls taken since July. The continued "close but no cigar" numbers to take an averaged lead has been especially frustrating for Republicans. Tuesday's election is a toss-up.

Same goes for the Senate race. Poll Tracker shows the difficulty for Senator Roberts since August and how he could not take a lead. This coveted Senate seat could go either way.

The most current polls are from SurveyUSA who have Governor Brownback trailing again, 43-46 percent and Senator Roberts behind, 42-44. percent. Though the GOP candidates have closed their margins in the last month, their momentum might be a little too late.