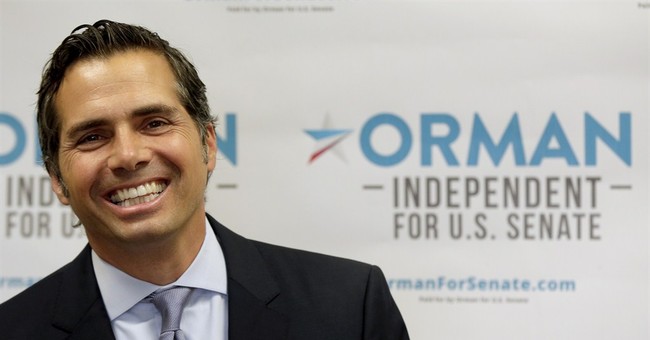 In the tight race between incumbent Republican Pat Roberts and "independent" candidate Greg Orman in Kansas, the Democrats are implicitly pro-Orman. The two-way race between Orman and Roberts has been close ever since Democrats pressured the official Democratic candidate to drop out of the race.

But now, the Kansas Republican Party has filed a complaint with the Federal Election Commission against the Kansas Democratic Party for illegal "in-kind" contributions to the Orman campaign.

Kansas Democrats have hung pro-Orman signs at official Democratic Party offices which, according to the GOP's complaint, is illegal:

Parties have traditionally used the volunteer exemption for activities such as get out the vote, printing and handing out bumper stickers and yard signs, door-to-door canvassing, and volunteer mail programs. But the Kansas Democrats are allowed to undertake these activities only on behalf of their nominees - not independent, non-affiliated candidates such as Greg Orman.

Various reports have indicated that the Kansas Democrats are supporting Greg Orman in numerous and unreported ways, apparently in violation of Federal law.