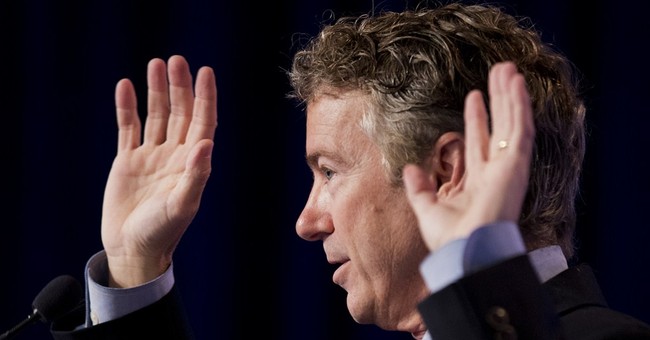 Sen. Rand Paul, the first-term junior U.S. senator from Kentucky, has made his name in Washington by opposing the GOP establishment. But this election cycle, he's doing a lot of good for the party apparatus.

As Kate Nocera at Buzzfeed reported:

In the coming weeks, [Rand Paul]'ll head to Kansas to support both Republican Sen. Pat Roberts and Gov. Sam Brownback, both of whom are struggling in the polls. He’ll also be making stops in Michigan, New Hampshire, Iowa, and Georgia for Republican candidates in those states. Next week, he’s headlining a Republican National Committee fundraiser in New York, followed immediately by a fundraiser for the National Republican Senatorial Committee in the suburbs of San Francisco. These are not exactly the gestures of someone on the outs with the “establishment.”

“I’m trying to help smooth things over,” he said. “We fight amongst ourselves in primaries … Democrats don’t agree with each other all the time. Yet they seem to somehow come together and quit fighting, and we need to do the same thing.”

Those Kansas Republicans aren't exactly the kind who are beloved by anti-establishment libertarians. But Paul has begun to build credibility as a GOP party standard-bearer, and he's becoming an instrumental campaigner for several Republicans. No matter what else one could say about Sen. Paul, it's hard to say that his fans aren't enthusiastic and devoted.

Katherine Miller also reports that Paul will headline a massive fundraiser for the NRSC:

Larry Ellison, one of the richest men in the world, will host a fundraiser for the Republican Senate fundraising arm featuring another big name — Sen. Rand Paul.

The $1,500-per-person NRSC fundraiser will be held in the former Oracle CEO’s California home, according to an invitation obtained by BuzzFeed News, and will also be attended by Sen. Orrin Hatch and Rep. Steve Daines. Hosts must give $32,400 and co-hosts must contribute $15,000.

Forget Pat Roberts and Sam Brownback - the NRSC has definitely come under fire from grassroots activists unhappy with the way the organization is run and how they get involved in primary races. But it appears that Paul is learning to love the GOP establishment - at least for now.